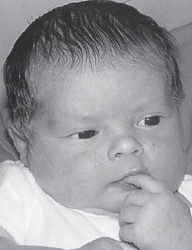 DECEMBER BABY – Chrystian Eli Blevins was born Dec. 13 at the Southern Ohio Medical Center. His parents are Joetta Brashear, formerly of Deane, and Roger C. Blevins of Ashland. His grandparents are Burness Holland and Virginia Holland, both of Deane; French and Kim Brashear of McRoberts; Willa Salyers Blevins, formerly of Carbon Glow, and Roger Blevins of Monticello. He is the great-grandson of Richard and Patricia Brashear of McRoberts, Charles and Juanita Salyers, formerly of Carbon Glow, Carlie and Poppie Blevins of Monticello, and Carl and Bonnie Mullins of Pikeville. Joetta Brashear is completing a fouryear law degree at MSU. Chrystian and his parents spent his first Christmas at the home of Virginia Holland along with his uncle, Jarod Holland, 10, and his aunt, Hannah Holland, 8.