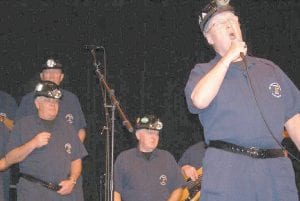 SINGING MINERS – Men of the Deeps, a choir of working and retired coal miners from the island of Cape Breton in Nova Scotia, Canada, performed a public concert on the evening of Feb. 5 at Letcher County Central High School in Whitesburg. Letcher Schools Superintendent Anna Craft said a large and enthusiastic crowd attended the public performance. Craft said Men of the Deeps received a standing ovation from Letcher Central students after performing for them earlier in the day. (Photo by Becky Johnson)