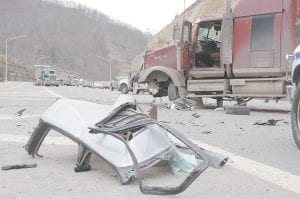 INJURY ACCIDENT – Two men were injured last week when a coal truck crossed into the path of the Saturn automobile in which they were riding on U.S. 23 at Dorton. Onlookers say the wreck occurred around 4 p.m. on Feb. 15 when the southbound truck crossed into the path of the northbound Saturn while the truck was attempting to turn onto KY 805. After hitting the coal truck’s left front wheel, the Saturn, pieces of which can be seen in the foreground, veered across the road and came to a rest under a flatbed truck. Both occupants of the car, believed to be students at University of Virginia-Wise, were removed from the car by Dorton firefighters using the Jaws of Life. Both of the injured men of were airlifted from the scene. No other information was available. (Photo by Chris Anderson)