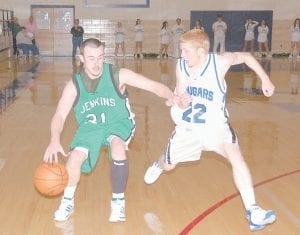 SURVIVAL TIME – Nathaniel Wilder drove the ball down the floor for Jenkins while being defended by Letcher Central’s Devon Blair during a 53rd District Tournament game played at Knott County Central High School in Hindman. Letcher Central (17-10) won the game, 61-53, to advance. Jenkins ends its season with a 9-17 record. (Photo by Chris Anderson)