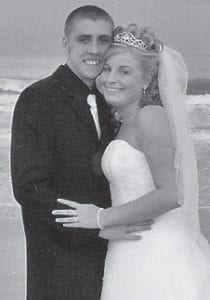 ANNIVERSARY – Jordan and Hannah Hall will celebrate their first wedding anniversary March 3. They were married in Jacksonville, Fla., at Mayport Naval Base and make their home in Macclenny, Fla. She is the daughter of Bruce and Joy Ambrose of Macclenny and the granddaughter of Wilma Ambrose of Claxton, Ga., Barbara Bates and Thomas Crews of Macclenny. He is the son of Michael Dean and Theda Hall of Macclenny, and the grandson of Garnet and Alvin Webb of Jacksonville, Fla., and Gary and Betty Hall of Jenkins. He is the greatgrandson of Evelyn Damron of Whitesburg.