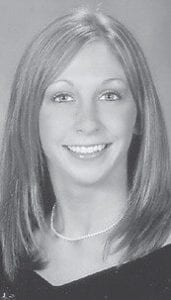 DEAN’S AWARD — Emily Craft has received a Dean’s Award from Eastern Kentucky University. The award is given to students who have been named to the Dean’s List for three semesters at EKU. She received a certificate and a pin from EKU, where she is a junior majoring in speech/language pathology. She is the daughter of Mike and Tena Craft of Whitesburg, and has a younger sister, Lori 17.