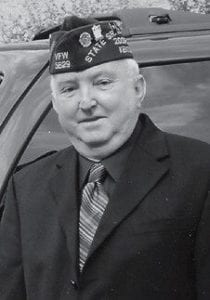 STATE COMMANDER – Jimmy Bates was installed as the Veterans of Foreign Wars state commander on June 23. He is the second person from Letcher County to hold this title; Ray Biggerstaff was the first. Bates has held a number of positions in the VFW including commander of Post 5829 in Whitesburg for 20 years and 14th District commander, as well as many state offices. He will travel the state during 2007-2008 to assist veterans.