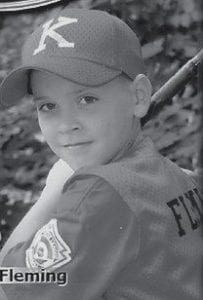 ZACHARY RYAN FLEMING, an upcoming fifth student at Emmalena Elementary in Knott County, received four distinguisheds and two proficients on school test scores. He is on the academic team, third-fourth basketball team, fifthsixth basketball C-team, B-team and A-team. He also plays fifthsixth football and is a member of the 9 & 10-year-old All Star team for Knott County. The year the team went undefeated in pool play and started tournament play July 4. Zachary knocked in the winning run against Fleming- Neon to move on to the tournament. He is the son of Chris and Tracy Fleming of Hindman.