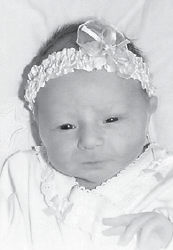 ONE MONTH OLD — Brylee DaySha Austin was born Sept. 15 at Norton Community Hospital in Norton, Va. She is the daughter of Kevin and Crystal Austin of Jackhorn. Her grandparents are Jeff and Bobbie Seals of Jackhorn, and Franklin “Red” and Edna Austin of Haymond. She is the greatgranddaughter of the late Zeak and Nellie Seals, June Bentley of Deane and the late Elemer Bentley, Giles and Lizzie Austin of Haymond, and the late Martin and Margie Anderson. She has an older brother, Harley Chase Austin, who celebrated his birthday Oct. 11.