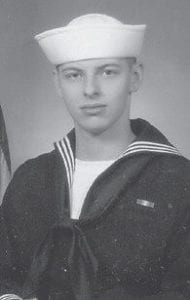 JOSHUA BROWNING was graduated from Navy boot camp on Oct. 16 in Great Lakes, Ill. He is the son of Carolyn and Jack Lucas of Whitco, and the grandson of Joyce Standifer of Cowan and the late Carl Standifer. Attending the graduation ceremony in addition to his family were Tabby Hopkins of Jenkins, who had been his supervisor when Browning worked at Arby’s, and her family.