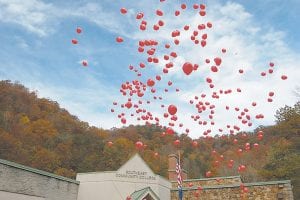 BALLOONS SIGNIFY DRUG-FREE PLEDGES — Biodegradable red balloons were released into the air last week in observance of Red Ribbon Week at the Whitesburg Campus of Southeast Kentucky Community and Technical College. At least 250 balloons were released on the college campus as a way to increase public awareness of the advantages of being drug free. The Letcher County Prevention Project provided the balloons. (Photo by Sally Barto)