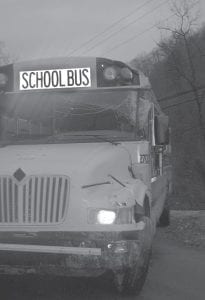 NO INJURIES — A Letcher County school bus knocked down a power pole in Craft’s Colly around 3:30 p.m. on Dec. 7. According to WYMT-TV the bus driver, Gary Anderson, said he swerved to keep from hitting an animal on the road. Roger Martin, director of finance for the Letcher County School System, said two students were on board bus no. 2703 at the time of the accident. Martin said neither child was injured but one was examined at Whitesburg hospital. Traffic was blocked at the accident site for more than two hours while American Electric Power Company workers removed the pole and electric wires from the road.