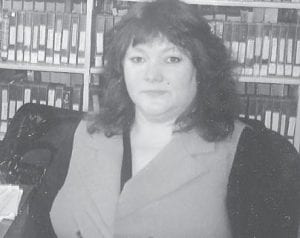 LIBRARIAN — Jenay Hall is the new head librarian of the Lillian Webb Memorial Library in Neon. A 1984 graduate of Fleming-Neon High School, she is married to Larry Hall and has two children, Tazsha and Lauren. Hall will also continue to be the children’s librarian at the Harry M. Caudill Library in Whitesburg. She previously worked with AmeriCorp and Save the Children at Fleming-Neon Elementary School, and earned an associate degree at Southeast Kentucky Community and Technical College. She worked at Fleming-Neon Elementary as a tutor and substitute teacher for the Letcher County School System until 2005, when she became circulation library at the Caudill Library. She completed her library certification in 2006, and became the Caudill Library’s children’s librarian.