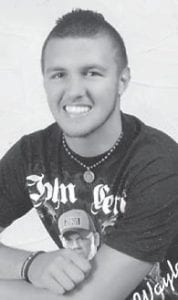 DEAN’S LIST — Waylon Sparkman of Hazard has been named to the Dean’s List for the fall semester at Belmont University in Nashville, Tenn, where he earned a 3.8 grade point average. Sparkman is the son of Danny J. and Diana Sparkman of Leatherwood, and has a sister, Brianna Sparkman, 16. His grandparents are Pearlie Bates of Thornton and the late Josh Wampler, and the late Reese Sparkman. He is a graduate of Hazard High School and is majoring in music business.