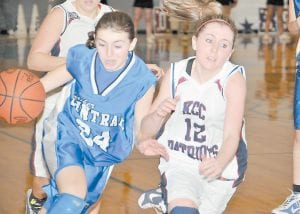 LEADING THE WAY — Letcher County Central’s sharpshooting freshman Kelah Eldridge put on a show during the Lady Cougars’ 66-57 win over Knott Central in the championship game of the Girls’ 53rd District Tournament. Eldridge, who burned the nets for 37 points, is seen here driving the ball up the floor during a very physical game. Eldridge connected on five three-point field goals during the game and also hit 12 of 15 free throws she attempted. The Girls’ 14th Regional Tournament opened this week in Whitesburg. On Tuesday night, Knott Central defeated Powell County, 65-61. Letcher Central will meet Breathitt County at 6:30 p.m. on Friday. (Photo by Chris Anderson)