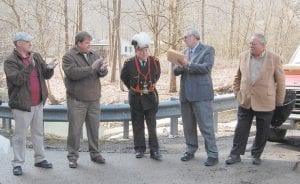 BIRTHDAY SURPRISE — A sign was unveiled on March 4 dedicating Sergent Loop after Arius Holbrook, of Sergent, on his 67th birthday. Arius Holbrook’s brother, Darrell Holbrook of Kona, had asked the Letcher County Fiscal Court to approve his request to dedicate the road in honor of his brother at the February court meeting. Arius Holbrook is a right eminent grand commander of the Grand Commandery of Knights Templar of Kentucky, the top ranking Masonic organization in the York Rite of Freemasonry. The main philanthropy of the Grand Commandery of Knights Templar focuses on providing eye surgery to those who could not otherwise afford it. Pictured above at the uveiling were, from left, District Three Magistrate Codell Gibson, Letcher County Judge/Executive Jim Ward, Arius Holbrook, Letcher County Attorney Harold Bolling and Darrell Holbrook. (Photo by Sally Barto)