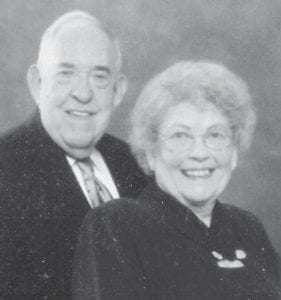 ANNIVERSARY — Clyde Willis Daniels of Millstone and Ferene Williams Daniels of Mayking were married April 22, 1950. They will celebrate their 60th anniversary with dinner with their daughter, Cynthia Gayle Weddle, and her husband Bart and their grandson, Daniel Maury Weddle, in Franklin, Ind. The couple were both graduated from Whitesburg High School in the Class of 1942.