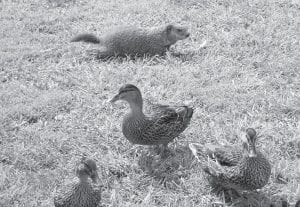 AND A GROUNDHOG, TOO — Mallards like the three seen in this photo are a common sight in downtown Whitesburg at feeding time, but the scene becomes a little more unusual when a groundhog decides it also wants in on the action. Melissa Marcum, of Neon, took this photo on Monday while she and her 14-year-old daughter, Kelsey, fed pieces of bread to the mallards near Dairy Queen in Whitesburg. Marcum said the groundhog was friendly and walked up close to Kelsey to accept bread.