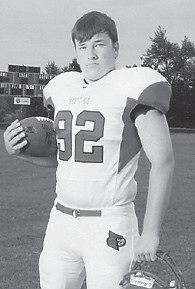 BRANDON CHARLES HICKS, 15, is a sophomore at Scott County High School and also attends Elkhorn Crossing School for advanced classes in engineering. He is the son of Henry Hicks and Brandy Fryman, both of Georgetown. His grandparents are Cathy and Ronald Hicks of Bottom Fork, and Barbara Hampton of Ice and the late Larry Hampton. He is the greatgrandson of Glenna Mae Hicks of Bottom Fork and the late Charles Hicks, and the late Wilma McNeely and Luther Potter.