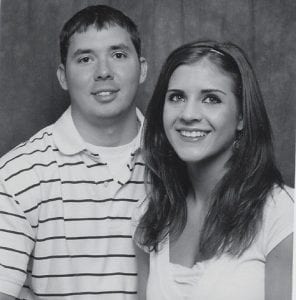 TO BE MARRIED – Roy and Joan Curry of Jenkins, announce the forthcoming marriage of their daughter, Kara Shea Curry, to Justin Matthew Collins, son of Stan and Barbara Collins of Wise, Va., The couple will be married at Wise Baptist Church on August 4. The brideelect was graduated in May from the University of Kentucky, where she received a bachelor of science degree in public service and leadership, with a minor in political science. The bridegroom-elect is a 2004 graduate of the University of Virginia’s College at Wise, where he received a bachelor of science degree in administration of justice. He is a police officer with the U.S. Capitol Police in Washington, D.C. The couple will reside in Alexandria, Va.