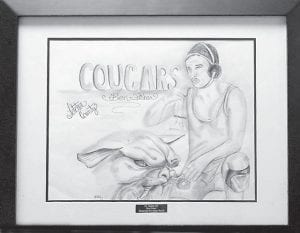 The Ben Fisher Memorial Wrestling Tournament was hosted by Letcher County Central High School on Jan. 7. Ben Fisher was a student on the wrestling team at LCCHS from 2005 to 2008. He died in 2011 at the age of 21. Seven schools participated in the event. Members of the Cougar wrestling team who received medals are Bobby McKenzie, third; Brandon Gibson, second; Jordan Gibson, second; Dakota Green, fourth; Ethan Hogg, third; and C.J. Philpot, second. The portrait of Fisher was done by Mona Daylong, mother of Tyler Daylong, a member of the wrestling team. The sketch and a trophy were presented to the Fisher family at the beginning of the event.