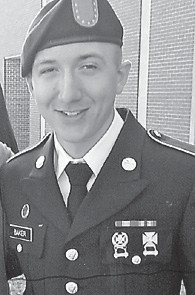 PFC Brandon Baker of Whitesburg, son of Timothy Baker, was graduated from Fort Leonardwood Military Police Academy on March 14. He scored 356 out of a possible 360 and received a medal as an expert in 9 mm and in M4 rifle. He is stationed in Hawaii before going to Afghanistan. He plans to join the Kentucky State Police when he finishes his military service.