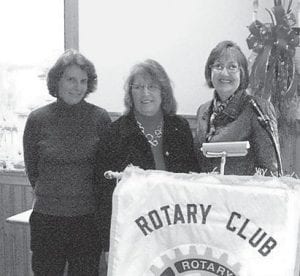 Two new members have joined the Rotary Club of Whitesburg. Sherry Wright, coordinator of federal programs, professional development and special education programs for Jenkins Independent Schools, and Eileen Sanders, a member of the Jenkins Board of Education, were installed by Rotarian Barbara Ison in December. Wright was sponsored by Deborah Watts and Sanders by Brenda DePriest. The two new members were presented with membership certificates and pins at the installation ceremony. Pictured (left to right) are Wright, Sanders and Ison. Eight new members have been inducted into the club since July.