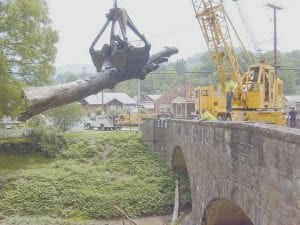 CLEARING THE WATERWAY – The city and state government joined forces Monday to clean debris blocking two bridges across the North Fork of the Kentucky River. In the photo above, a heavy equipment operator used a claw/clam bucket to remove one of several large trees which had caused the river to dam at the stone bridge leading in the Upper Bottom neighborhood in East Whitesburg. Mayor James W. Craft said Whitesburg businessman Don Childers helped with the effort by providing dump trucks which took away at least 10 loads of debris. Craft said most of the debris was trees that had somehow washed down the river. “I’ll bet there wasn’t a trash bag full of garbage,” he said. Craft said workers experienced some excitement when a large water snake fell out of the debris and onto the floor of the bridge. “You talk about scattering,” he said. (Eagle photo)