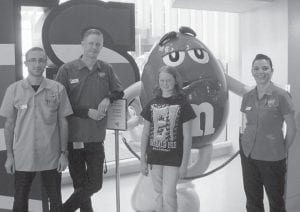 Darhla Miles, 12, of Premium, is pictured with three employees of M&M’s World in London, England on July 21. She has now visited all four M&M’s World locations. In 2006, Darhla explored the one in Orlando, Fla., when she was six. At the age of eight, she bought M&M’s at the store in Times Square in New York City. She has visited the M&M’s World in Las Vegas, Nev., three times in the last three years. Darhla, whose favorite candy is M&M’s, enjoys picking out her favorite M&M colors and flavors at the stores. She has visited all four locations with her parents, Avery and Angela Miles, and her brother, Dustin.