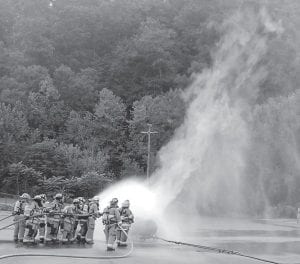 On Sept. 10, the Whitesburg Fire Department hosted a flammable liquids and gases class. Fifty-two firefighters participated from eight departments in Letcher and Perry counties including Whitesburg, Jenkins, Mayking, Gordon, Avawam, Vicco, Hazard and Jakes Branch. The class was conducted by instructors from Region 12 State Fire Rescue Training. The firefighters, wearing protective equipment, approached a controlled burn of a propane tank in two groups of four to extinguish the blaze. Heritage Propane of Baxter provided 500 gallons of propane for the class.