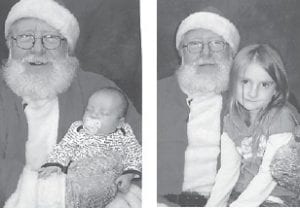 WITH SANTA — Joe Don Pratt Jr. and his sister Trinity Nichole Dawn Pratt, who celebrated her sixth birthday on Dec. 19, recently posed for pictures with Santa Claus. Joe Don was born Nov. 13. They are the children of Marie and Joe Pratt of Craft’s Colly and have a sister, Taylor Sedilla LaShae Pratt, 9. Their grandparents are Sharon and John Pratt of Craft’s Colly, Rita Pratt of Jenkins, and Glenn and Goldie Triplett of Jenkins. They are the great-grandchildren of Anna Wyatt of Jenkins.