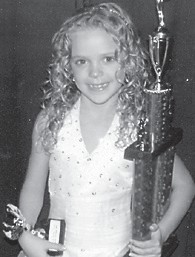 TINY MISS MOUNTAIN HERITAGE for 2010 is Kaci Nicole McCown, 7, daughter of Oscar and Tonya Mc- Cown of Isom, and sister of Dalton McCown, 11. She is the granddaughter of Doris McCown of Eolia and the late Larry McCown, and Roger and Katy Stephens of Isom. She is a second-grade student at West Whitesburg Elementary School. 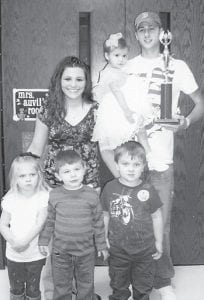 PAGEANT WINNER — Heidi Nichole Brooks won first place in the 19-24 month category in the Mountain Heritage Baby Pageant. She is the daughter of Paul Brooks and Reana Cook, both of Whitesburg. Her grandparents are Bobby and Gail Cook and Paul ‘Herky’ Brooks, all of Whitesburg. She is the great-granddaughter of Anna Mae Cook of Whitesburg, Phillis King of Jeremiah, and Paul and Joyce Brooks of Sandlick. She is pictured with her parents and (left to right) cousin Lana Morton, older brother Cadon, and cousin Clayton Morton.