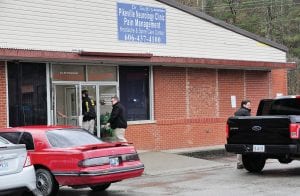 CLINICS CLOSED FOR AT LEAST ONE DAY — Pikeville Neurology Clinic Pain Management locations at Pikeville (above) and Belfry were closed Monday, with a sign on the Pikeville office saying the office would be reopened Tuesday, after representatives of several agencies, including the U.S. Drug Enforcement Administration and Kentucky State Police, showed up at both locations. 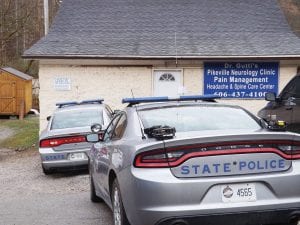 The two clinics, plus one in Whitesburg, are under the direction of doctors Sai and Sujata Gutti. No further details about the reason for the closure or presence of federal authorities was available as of presstime. (Photos courtesy Russ Cassady and Terry L. May)