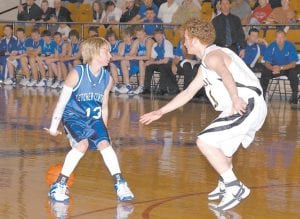 Letcher County Central’s Josh Proffitt dribbled behind his back while facing off against a Cordia defender in the boys’ 53rd District Championship game at Knott County Central. (Photo by Chris Anderson)