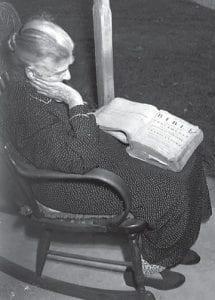 West Virginia photographer Finley Taylor captured Susie Foster resting from her Bible study. This is one of the photos of Appalachian people on exhibit at the Appalshop.

An elderly woman dozes off in a chair, a well-worn Bible open in her lap. Two men make music beside a railroad track, one picking a guitar, the other squeezing an accordion – leaving the viewer wanting to hear the sound.

These are photographs on exhibit through Dec. 17 at the Appalshop in Whitesburg.

They are the work of West Virginia pictureman Finley Taylor, who photographed his neighbors around Richwood, W.Va.,, from 1917 to 1949, and of various other photographers from the now- defunct Richwood News-Leader and the West Virginia Hillbilly.

Also in the exhibit are pictures by Mark Romano, who put together the show, titled One Hundred Years of Location Photography in Appalachia. Romano’s photos are the results of two years of following coal miners on the job at 15 mine sites of Brooks Run Coal in central West Virginia.

What the viewer will not see in this collection of Appalachian images are photos that pander to stereotypes. None of the pictures features dirty-faced, raggedy children, and none depicts candidates for freak shows. 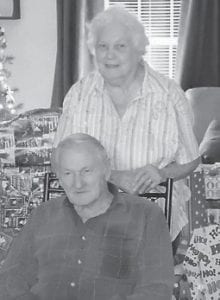 Gene and Billie Jean Fleming of McRoberts, celebrated their 60th wedding anniversary Sunday, Dec 4. He is a retired coalminer and she is retired from the postal service and as the owner of Fleming Superette. The couple have six children, David Fleming and wife Linda, of Norton, Va., Steve Fleming and wife Jan of Neon, Barry Fleming and wife Claudette of Kona, Sharon Smallwood and husband Billy of Payne Gap, Freida Fleming, and Shannon Potter, both of McRoberts; and a number of grandchildren and great-grandchildren.

Rather, the high-quality images show everyday mountain people in everyday poses – working in the coal mine, feeding the cow, gathering with the family, talking with a friend.

And though these photographic subjects are from West Virginia, they are kin to people throughout the Appalachian coalfields.

Romano will be at Appalshop on Friday, Dec. 9 to participate in the Winter Artwalk in downtown Whitesburg from 4 to 9 p.m. Appalshop is one of several places in the city that will exhibit a variety of works by regional artists.