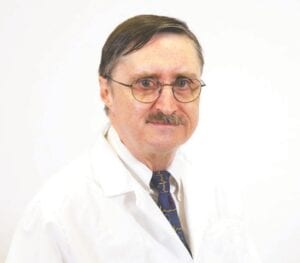 Three generations ago, Letcher County got its first public health doctor. Now his great-nephew is chairman of the health department he used as a bully pulpit to advocate for vaccines against polio, diphtheria, smallpox, and other diseases.

The board of the Letcher County Health Department has chosen Dr. Ricky Collins as the new chairman of the health department. Collins is the great-nephew of Dr. Randall Dow Collins, who became the public health officer for the county in 1930. Prior to that, the doctors who had served as chairman of the department’s board of directors served that purpose. Known as “Dr. Dow,” he continued in the position until 1965, his wife Grace Wells Collins, a registered nurse, at his side.

Ricky Collins is a family practice and emergency room doctor who began practice in Letcher County in 1992, 20 years after graduating from Whitesburg High School. Collins attended Morehead State University and returned to medical school later at American University of the Caribbean in Montserrat.

Collins has been on the board of directors of the health department before, but this is the first time he has served as chairman. He replaced longtime chairman Dr. William Col-

Collins, who Ricky Collins said is very distantly related. Though he said he was always proud of his uncle’s work on at the department, he never really wanted to be chairman.

“The board caught me in a down moment and elected me,” he said. “They ambushed me.”

The Board of Health now meets only one time a year most years in order to set the tax rate, but has met three times already this year because of financial difficulties. The tax base in the county is shrinking, and the advent of the Affordable Care Act allowed more people to go to private doctors. Some of the federal funding for the public health clinics was also moved to Rural Health Clinics.

When his great-uncle was in the department, things were different, Collins said.

“Back then, the health department had a doctor. They gave all the vaccinations, kept track of births and deaths,” Collins said. “That’s what Aunt Grace did. She was registrar for the county, and she was Uncle Dow’s nurse. She was an RN.”

In those days, the public health doctor and nurse would go to every school and administer vaccines to the students.

“And you had to take them then. You couldn’t just say, ‘I don’t want to,’ they’d chase you down,” Collins said.

And give them, Dr. Dow Collins did. When typhoid fever was rampant in the county after the 1957 flood, he gave 30,000 vaccines in the county. In his time here he dealt not with one outbreak of disease, but many — smallpox, polio, diphtheria, whooping cough, tuberculosis and the Asian flu. He advocated for vaccines, and convinced residents they were necessary. In 1955, the Kentucky Junior Chamber of Commerce gave awards to two doctors at its state convention — Dr. Jonas Salk for his polio vaccine, and Dr. Dow Collins for his rabies prevention program. The health department here still holds annual rabies vaccination clinics for pets.

Randall Dow Collins was born in 1900 to Mr. and Mrs. William Collins of Colson. He was graduated from the University of Louisville Medical School in 1927, and went straight to Harvard University for a Master’s of Public Health. He began practicing medicine in Whitesburg in 1929, and was hired by the health department the following year. He married Grace Wells, a public health nurse, in 1948 in a private ceremony officiated by the county judge. The two worked side by side until he retired in 1965.

Ricky Collins now has the desk Dr. Dow used until his death in 1975.

“The desk in my office is the desk that he had in his office in the old health department, which was in the basement of the courthouse,” Collins said. “When they tore it down, he moved the desk up to his house on Letcher Street and used it in his office there. He had a little office in his basement that he called the Mayo Clinic South.”

Collins said there are “big things in the works” at the health department now, but said he couldn’t talk about what yet. He said the loss of funding has “put a big damper” on how the department operates.

“ There’s going to be considerable changes in the next several years,” he said.

A few years ago, the health department had six nurses working in its new office at the corner of East Main Street and Madison. Now it has just one.