Pickling beets for the first time in years 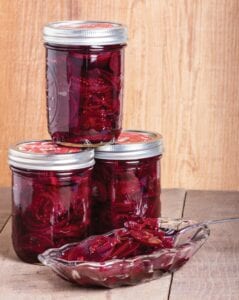 I’m guessing that it had been at least 15 years since the last time we pickled some beets. Actually, like several other misnamed preserves, the beets are not technically “pickled.”

Genuine pickles go through a fermentation process that usually takes anywhere from 10 days to 3 weeks, depending on the vegetable that needs pickling. Stuff like bread and butter cucumbers, other so-called sweet pickles, beets, asparagus and some other “pickled” canned veggies are simply processed in lots of vinegar, sugar, salt and spices, then allowed to seal, but no actual fermentation ever takes place. I have no idea why we call them pickles and, in the final analysis, it probably doesn’t matter.

The most recent beets endeavor came about when I saw a Facebook post that has been making the rounds. It showed a jar of “pickled” beets and asked “would you eat this?” as if the person doing the post found them utterly disgusting. I, on the other hand, took offense because, unless I was faced with starvation during the middle of a hard winter, I would not swap a quart of pickled beets for a dozen quarts of any pickle based on cucumbers.

When I was growing up we kept a jar of pickled beets in the refrigerator from November until late May. We usually had soup beans for supper two or three times a week during cold weather and soup beans ain’t soup beans unless we had a pickled beet and sliced onion on the side to go with them. If I woke up hungry in the middle of the night, nothing satisfied a midnight craving better than a couple of good cold beets and a chunk of cornbread.

We planted beets on a whim this year. They simply had not come up over the last two or three years, most likely because of poor seed quality. But this year, one of those little seven-packs-for-adollar deals from Dollar General really paid off. One little pack of Detroit Dark Red seeds yielded nearly a peck of fresh beets.

Loretta got five quarts from them and would have gotten twice that had we not let them sit in the kitchen for a week before peeling them. Beet skins will scald off slick as a ribbon if they are fresh. Be prepared to use a sharp knife if they are more than two days out of the garden. Ours wound up more butchered than peeled but they tasted fresh and juicy.

Our problem was finding the spices necessary to prepare the recipe she uses. If you can’t find whole allspice and whole cloves, you are essentially wasting your time when it comes to pickled beets. Other than that, the basic cooking process and the sugar/ vinegar ingredients are essentially the same for more than a dozen online recipes that can be Googled up in minutes.

Some cooks claim that the beets should be stored for at least 30 days before opening them. I opened a jar two days after they were canned and have since devoured all but two or three pieces. If they taste any differently in November than they did in July I’ll let you know. I already know they won’t taste any better.

Now the plan is to run out to the closest hardware store and buy a scoop of beet seeds to go along with the mustard, turnips, lettuce, collards and spinach I hope to have planted by the time you read this missive. I’m not about to rely on a Dollar Store this time around.

Beets, along with all the aforementioned veggies, will actually grow better in autumn than they do in spring plantings if we can get some rain in August and September. They should be ready to harvest in less than 60 days after planting.

In the meantime I’m going to wait until I’m pretty sure we have another crop before I start on the ones my wife has already canned. It would be a shame to run out of pickled beets before soup bean weather is upon us.