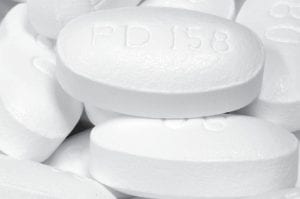 Cholesterol-lowering statins such as Lipitor (seen here) might be leading some patients to abondon heart-healthy lifestyles, assuming drugs alone will do the trick. (AP Photo)

Ten years of U.S. data suggest cholesterol-lowering statins are giving patients a license to pig out.

Calorie and fat intake increased among statin users during the decade — an indication that many patients might be abandoning heart-healthy lifestyles and assuming that drugs alone will do the trick, the study authors said.

They said the goals of statin treatment should be to help patients achieve benefits unattainable by other methods, “not to empower them to put butter on their steak.”

Statins may keep cholesterol low even if people eat less healthy food and slack off on exercise, but those bad habits can contribute to obesity, high blood pressure, diabetes and other problems that are bad for the heart. The study was published online in JAMA Internal Medicine.

Dr. Rita Redberg, the journal’s editor, said the study “raises concerns of a potential moral hazard of statin use,” in addition to already known potential side effects risks including muscle aches and diabetes.

“Statins provide a false reassurance,” she said. “ People seem to believe that statins can compensate for poor dietary choices and sedentary life.”

The researchers examined 1990-2010 government health surveys involving nearly 28,000 adults aged 20 and older. Different people were surveyed each year, underwent physical exams and blood tests, and reported their food intake. The portion who used statins steadily increased, from 8 percent in the first year to 17 percent in the final year.

Average body- mass index among statin users increased from 29 — just below the cutoff for obesity — to 31, or one point higher than that cutoff.

Diabetes also increased — 29 percent of statin users had it in 2010 versus 22 percent in the study’s first year. A link between statin use and diabetes has been documented previously, but reasons for the trend in the study are uncertain.

Calories and fat intake were lower among statin users than nonusers early on, but by the final years that difference vanished.

Calories, fat intake and diabetes remained stable among adults not using statins, and there was a smaller increase in bodymass index among nonusers, although the average BMI remained in the overweight category throughout.

The study doesn’t prove that statin use prompted patients to slack off, or that there is a true link between the drugs and the changes seen. But the researchers said the results raise troubling questions.

If, for example, the average statin user is eating 192 more calories daily than 10 years ago, that could translate into many extra pounds each year — unless activity levels also increased, said Dr. Martin Shapiro, the senior author and an internist and researcher at the University of California in Los Angeles.

The study “certainly doesn’t mean that everyone responds this way, but the concern is that people who are on statins ought to be particularly careful about how many calories they eat and what kinds of foods they eat,” he said. “They don’t appear to be doing that.”

Shapiro said the results mirror his own experience taking statins.

With a family history of heart disease, Shapiro said he had carefully controlled his weight and avoided high cholesterol foods. But Shapiro said he “began to be less stringent” about his diet after his doctor prescribed a statin to lower his “bad” cholesterol.

Heart disease prevention guidelines issued last November by the American Heart Association and American College of Cardiology stress the need for healthy lifestyles and include recommendations for regular exercise and heart-healthy eating. But they also would broaden statin use — about one-third of U.S. adults would be told to consider taking the drugs under the guidelines.