Named ‘National Hospital of the Year’ for 3rd straight year 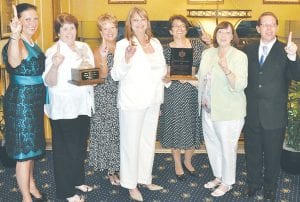 Pikeville Medical Center has become the first hospital in the nation to win the American Alliance of Healthcare Providers’ “National Hospital of the Year” honor for a third consecutive year.

“What you have been able to achieve is simply amazing,” American Alliance of Healthcare Providers (AAHCP) President Rick Parr said during the group’s press conference and awards banquet at the National Press Club in Washington, D.C., on June 29.

Pikeville Medical Center (PMC) was among 100 hospitals from across the nation that received at the Hospital of Choice Awards Banquet for 2012 at the Embassy Row Hotel. PMC was the only Kentucky hospital honored, and was one of four Top 10 hospitals with representatives at the banquet. In addition to PM, they included they included Parrish Medical Center of Florida, South Haven Health System of Michigan, and the University of California-Davis Medical Center.

For an unprecedented third year in a row, Pikeville Medical Center was recognized as the National Hospital of the Year. For achieving this feat, the AAHCP’s Choice Award Selection Committee presented Pikeville Medical Center the Hospital of Choice Emeritus Award. This Award gives PMC permanent rights under its current leadership of President and Chief Executive Officer Walter E. May to compete against the100 top hospitals for Top Ten honors.

“You will no longer have to compete for this award,” Parr said. “You will always be a Hospital of Choice.”

According to the AAHCP, the Hospital of Choice Award is designed to find America’s most customerfriendly hospitals. The selections are based on a secret review of a hospital’s performance in customer service, public communication and citizenship.

PMC was among 400 health care facilities to apply for the honor, including elite research facilities such as Johns Hopkins Hospital of Baltimore, Vanderbilt University Hospital of Nashville, Mayo Clinic Hospital of Rochester, Minn., and Christ Hospital in Cincinnati.

“There was a time when few people would have believed that Pikeville Medical Center could win National Hospital of the Year,” May said. “Now we have achieved the honor three consecutive years. We have truly made history this year by being named the nation’s best hospital once again.”

Parr said his visit to Pikeville Medical Center left a lasting impression on him and the organization.

“When we visited the hospital and talked with people in the community and visited the little shops there, you knew this was a special place,” Parr said. “There’s a southern charm that sets the folks there apart.”

May said the hard work and dedication of the hospital’s more than 2,400 employees speak volumes for the community.

“This award validates what I see every day,” May said. “We have positioned ourselves as one of the premier hospitals in the nation.”

Pikeville Medical Center underwent a thorough onsite survey from the AAHCP based on six principle areas: standards of conduct, performance management and improvement, staff development and training, systems of communication, good citizenship and educational and promotional material available to consumers.

“We will always strive for excellence at PMC,” Chief Operating Officer Juanita Deskins said. “We are truly committed to improving the lives of the people of eastern Kentucky and southern West Virginia.”