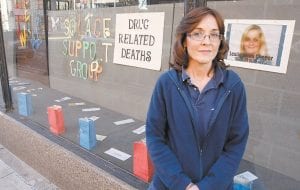 Lisa Roberts, a public health nurse at the Portsmouth City Health Department, stands in front of a storefront display in Portsmouth, Ohio. Nearly one in 10 babies were born addicted to drugs last year in southern Ohio’s Scioto County. Admissions for painkiller overdoses were five times the national average. (AP Photo)

Nearly one in 10 babies were born addicted to drugs last year in southern Ohio’s Scioto County. Rehab admissions for prescription painkiller addictions were five times the national average. In a rare step, the health commissioner declared a public health emergency, something usually reserved for disease outbreaks.

The culprits putting the rural county at the forefront of a burgeoning national problem are not only the people abusing the painkillers, officials say. They blame at least eight area “pill mills” — clinics or doctors that dole out prescription medications like OxyContin with little discretion. At least two health care providers are facing criminal charges.

“I would describe it as if a pharmaceutical atomic bomb went off ,” said Lisa Roberts, a nurse for the health department in Portsmouth, an Ohio River city of about 20,000 with falling population and high unemployment. 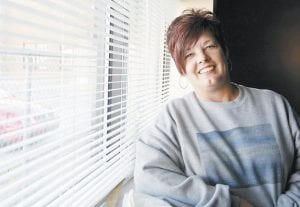 Andrea Queen poses inside the Counseling Center, in Portsmouth, Ohio. Queen, who survived painkiller addiction, is now a counselor at the center. (AP photo)

Health officials say nine of every 10 fatal drug overdoses in Scioto (pronounced sy-OH’-toh) County are caused by prescription drugs. Of those drug deaths, nearly two-thirds of the individuals did not have prescriptions, meaning they bought the drugs illegally or got them from friends or family.

At least 117 people died of overdoses in the county between 2000 and 2008. Pictures of the dead fill a storefront in downtown Portsmouth that a grieving mother converted to a memorial to the epidemic.

Among them is a photograph of Leslie Dawn Cooper, who struggled with her addictions for years before dying at age 34 of an overdose of oxycodone, the key ingredient in OxyContin, on Oct. 3, 2009. The night before, she paid $250 in cash for the prescription at an alleged pill mill in Portsmouth, then took it to a pharmacy in Columbus, 85 miles away, because no local pharmacist would fill it.

On Cooper’s way home she called her mother, Barbara Howard, and said she was going to church.

In March, Paul Volkman, a doctor who worked at the Tri-State Health Care and Pain Management clinic in Scioto County and has been linked to Fletcher, goes on trial on charges of helping distribute millions of highly addictive drugs that authorities said led to nearly a dozen deaths.

Volkman’s attorneys have dismissed the charges as a case of “an inflated and irrational fear of the medical science of pain treatment.”

Thanks to a thriving drug culture that breeds crime and intravenous use, Scioto County’s per capita rates of murder, fatal overdoses and hepatitis C infections have in recent years been outranked only by Ohio’s biggest urban areas. The DEA considers the county one of the worst places in the country for prescription painkiller abuse, with more people abusing per capita than almost anywhere else.

Health Commissioner Aaron Adam’s public health emergency declaration nearly a year ago was a largely symbolic gesture but did allow the county to set up a military-style chain of command and could allow staff ers from other health department divisions to work solely on the problem.

Portsmouth, the county seat and center of a region that also includes parts of West Virginia and Kentucky, has stopped issuing permits for new drugs-ondemand “pill mills.” Gov.-elect John Kasich met with Roberts and local health officials last week as he visited Portsmouth to talk about the problem.

Also last week, federal prosecutors charged the owner and two employees of alleged pill mills in Columbus with illegally distributing painkiller prescriptions. Many of the customers at the pain management clinics came from Kentucky, West Virginia and other parts of Ohio, according to the government.

First marketed in the 1990s, OxyContin became a favorite of addicts because it could be crushed, destroying the mechanism that allows it to kill pain over time and providing immediate euphoria when snorted or injected.

In 2007, a federal judge ordered Purdue Pharma L.P., the maker of OxyContin, and three of its executives to pay a $634.5 million fine for misleading the public about the painkiller’s risk of addiction.

Oxycontin’s dangers and popularity are well-known nationwide, but especially in Appalachia, which scrapes across southeastern Ohio. Scioto County prosecutor Mark Kuhn said it’s common to see Kentucky and West Virginia plates on cars lined up at the county’s pill mills.

Overdoses surpassed car accidents in 2007 as the leading cause of accidental death in Ohio. The Centers for Disease Control and Prevention said last year that the same was now true for 15 other states.

Recovering painkiller addict Andrea Queen considers herself lucky to be alive. She started partying in high school, first with alcohol, then diet drugs, then pain pills.

Her addiction cost her a teaching job, led to felony theft charges for stealing checks to pay for drugs and almost killed her through an overdose. After jail time and a stint in rehab, she is off drugs and counsels addicts.

“I see, every day, a reason that I don’t ever want to go back to doing it again,” Queen said.

It used to be that people became addicted to the pain pills in their 20s and 30s, usually moving on from alcohol or marijuana, said Ed Hughes, director of the center where Queen gives counseling.

But the age of addiction is dropping. In late January, police were called to Valley Middle School in Scioto County where a junior high school girl had been caught with a plastic bag full of hydrocodone, a powerful painkiller. She had found the drugs at home and, with a fellow student, was distributing them to other classmates.

The youngest of the group was in the seventh grade.