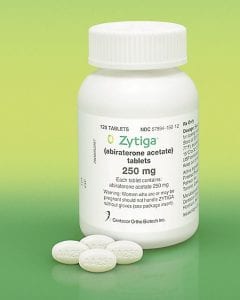 In a study of nearly 1,100 men, Zytiga doubled the time patients lived without their cancer getting worse. (AP Photo/ Johnson & Johnson)

A hormone-blocking pill approved last year for some men with advanced prostate cancer now also seems to help a wider group of men who were given it sooner in the course of treating their disease.

In a study of nearly 1,100 such men, Johnson & Johnson’s Zytiga doubled the time patients lived without their cancer getting worse.

The drug also seems to be improving survival, but it will take longer follow-up to know for sure. Independent monitors stopped the study once it was clear the drug was helping and let men who had been getting dummy pills to switch to Zytiga. At that point — after a median treatment time of two years — 34 percent of men on dummy pills had died versus 27 percent of those taking Zytiga.

“Our hope is that this can become a new option” for up to 30,000 men each year in the United States, said study leader Dr. Charles Ryan of the University of California, San Francisco.

He gave results June 2 at a meeting in Chicago of the American Society of Clinical Oncology.

Prostate cancer is the most common cancer in American men. In the United States alone, more than 240,000 new cases and 28,000 deaths from the disease are expected this year. Many cases don’t need treatment because the cancer grows so slowly it isn’t a threat. For men who choose treatment when the disease is still confined to the prostate, surgery and radiation are common options.

Once it spreads, though, it often is treated with drugs that curb testosterone. They block about 90 percent of the hormone, “but that remaining 10 percent can still stimulate the cancer and cause death from the disease,” Ryan said.

Researchers gave more than 1,000 patients in the U.S., Canada, Europe and Australia either Zytiga or dummy pills plus a steroid that also is widely used to treat such cases.

When the study was stopped, the median time until cancer worsened in the group getting dummy pills was about eight months. Those on Zytiga were faring much better, so doctors can only estimate the time it is taking for their cancers to worsen — at least 16 months, Ryan said.

There were more cases of high blood pressure, fluid retention and heart problems among men on Zytiga. Like other hormoneblockers, it can cause hot flashes and sexual problems. And Zytiga is expensive — $5,500 a month in the United States.

The study was sponsored by the drug’s maker, Johnson & Johnson’s Janssen division, and some study leaders have financial ties to the company. The company plans to seek approval later this year to sell the drug for men like those in the new study.

Michael Wells, 65, a retired construction worker from Oakville in California’s Napa Valley, was diagnosed nearly 12 years ago with prostate cancer that had spread to his bones. Standard hormone and radiation treatments kept it in check for many years, but when it started growing, he enrolled in the study.

Zytiga gave him high blood pressure but other than that, “I have not noticed any difference taking the pills — I’ve always had hot flashes” on prostate medicines, he said.

He has now been on Zytiga for nearly three years, and scans show his cancer is in check.

“It’s worked for me, and it’s still working,” Wells said.