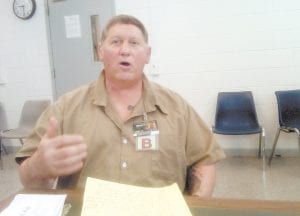 Gerald Dixon, 53, serving a four-year sentence for transporting prescription painkillers from Florida back to Ohio for illegal sale, described his drug dealing activities during an interview at Lebanon Correctional Institution in Lebanon, Ohio. (AP Photo)

As he sat in the doctor’s office, ex-boxer and weightlifter Gerald Dixon explained that years of sports had left him in pain, especially his hands, and he was looking for relief.

After a cursory examination at the clinic in West Palm Beach, Fla., Dixon left with a prescription for 180 doses of OxyContin — and a plan to return to his Ohio home and sell them on the street.

The trips made by Dixon and others like him — authorities dub them “prescription” or “drug” tourists — have complicated the challenges investigators face trying to stem the flow of painkillers, whose prevalence have made drug overdoses the leading cause of accidental death in dozens of states including Ohio, Florida, Kentucky and Utah, surpassing car crashes.

Dixon, 52, a drug dealer for most of his adult life, had recently discovered a new angle on an old profession. By driving to Florida just once a month and acquiring a bagful of pain pills — legally and illegally — he could earn tens of thousands of dollars.

The only thing the medical clinics that Dixon visited in Florida cared about was the money, he said. A diagnosis for severe pain was easy to obtain.

“It’s all about cash, cash, cash,” Dixon said during a prison interview with The Associated Press. “You go, you pay the money, and they’re going to come back and say, ‘Yeah, you’re right, you was hurt.’”

Prescription tourists thwart local efforts to combat the illegal sale of painkillers and to treat addicts by bringing huge volumes of drugs in from outside. Cracking down on the trade also requires complicated prosecutions crossing multiple state lines.

These tourists are based in a variety of states, but investigators in Kentucky, Ohio and West Virginia — where authorities have already cracked down on local pill mills — are among the busiest trying to track trips to Florida, Georgia and elsewhere.

The lucrative business involves drug dealers dispatching underlings like Dixon to states with numerous pill mills where they load up on painkillers, then return to sell the drugs to addicts willing to pay as much as $100 a pill, or as much as 10 times the drugstore price.

Florida for years was a popular destination because of its virtually unregulated pain clinic industry, which provided easy access to thousands of painkillers marketed under names like OxyContin, Vicodin and Percocet.

As Florida cracks down on its pill mills, the clinics have migrated to states like Georgia, which had practically none three years ago and now has as many as 150, said Richard Allen, director of the Georgia Drugs and Narcotics Agency.

Runners — another term for people like Dixon or addicts sent to buy pills and take them home — are coming from as close as Kentucky and Tennessee and as far away as Arizona and Nebraska, Allen said.

“They’re like a swarm of locusts,” he said. “Once they have a scrip, they’ll hit every pharmacy in the state trying to get them filled.”

In eastern Kentucky, several residents arrested in 2009 in a massive drug sweep had visited the Lauderhill Medical Clinic in Oakland Park, Fla. U.S. Attorney Kerry Harvey estimates that nine of every 10 patients at the clinic are from Kentucky. He prosecutes about five dozen cases a year involving prescription drugs.

At West Virginia’s Huntington Tri-State Airport, authorities have dubbed low-cost flights to Florida aboard Allegiant Air the OxyExpress. The airline isn’t accused of wrongdoing, and spokeswoman Jessica Wheeler says it hasn’t been approached by authorities.

In Tennessee, strict laws governing pain clinics force drug dealers out of state for supplies, using Interstate 75 to bring pills back from Florida or move them farther north, said Kristin Helm, spokeswoman for the Tennessee Bureau of Investigation.

Ohio has prosecuted several prescription tourists in recent months, with a federal judge in December sentencing Christopher Thompson of suburban Columbus to 15 years in prison for leading a scheme involving more than a dozen other people who traveled from Ohio to Florida, obtained and filled prescriptions for oxycodone and other drugs, and mailed the pills back to central Ohio for illegal distribution.

“The effect is the same effect as if they were coming out of our own pain clinics,” said Aaron Haslam, who directs Ohio’s anti-painkiller abuse efforts in the state’s attorney general’s office. “We have overdoses all over the state of Ohio because of it.”

Defendants in one southern Ohio case brought back drugs worth $50,000 on the street in one trip, Haslam said.

Authorities have fought back with extensive crackdowns in Florida against pill mills and with prosecutions in states like Kentucky, Ohio and West Virginia of both drug tourists and the Florida doctors who wrote prescriptions. State medical boards also regularly discipline or revoke the licenses of doctors who overprescribe painkillers.

Florida is finally seeing a drop in pill mills and doctors prescribing painkillers after enacting a 2011 law toughening penalties against doctors and clinics engaged in prescription drug trafficking.

Still, such a stance has consequences. A group sued the state in 2010 over the pill mill crackdown. One of the doctors, Paul Sloan, owner of Florida pain management clinics in Fort Myers and Sarasota, says that there’s no question that some doctors and clinic owners were doing bad things, but that the state has overreacted.

“We’re dealing with a war on legitimate medications that’s being dealt with like we’re all cartels and drug lords,” he said.

Posing as such a patient can serve a prescription tourist well.

Dixon said he traveled to West Palm Beach for about seven months in 2008, visiting clinics and picking up prescriptions and pills over a two or three-day period. Dixon never visited more than one doctor, but soon was also buying pills from people he met on the streets in deals arranged in motels.

“Once you get to motels down there, it’s just like a Wal-Mart or Kmart or Kroger store for drugs, pills, whatever,” Dixon said. “Once you get in that clique, they will find you.”

He said it was not uncommon to see pills offered from bulging 50-pound dog food bags filled with the prescriptions.

Dixon was arrested in 2008 returning from what would turn out to be his last trip, set up, he says, by a fellow drug dealer. He had 6,000 pills hidden in a false exhaust system he’d installed beneath the car. He is serving a four-year sentence for drug trafficking charges. Although painkillers are a legal drug, it’s against the law for anyone but a doctor or pharmacist to dispense them.

“We’re squeezing a balloon,” he said. “And as you squeeze the balloon, the air in the balloon goes someplace else.”