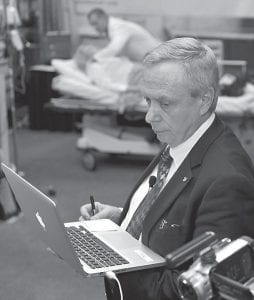 In this March 14, 2010 photo, William Hamman watched data on a computer as he supervised doctors during a cardiology simulation at the Georgia World Congress Center in Atlanta. Hamman, an airline captain who lives in Michigan, claimed to be a cardiologist and trained other doctors in teamwork. But he never got a medical degree. (AP Photo/Gregory Smith)

He seemed like Superman, able to guide jumbo jets through perilous skies and tiny tubes through blocked arteries. As a cardiologist and United Airlines captain, William Hamman taught doctors and pilots ways to keep hearts and planes from crashing.

He shared millions in grants, had university and hospital posts, and bragged of work for prestigious medical groups. An Associated Press story featured him leading a teamwork training session at an American College of Cardiology convention last spring.

But it turns out Hamman isn’t a cardiologist or even a doctor. The AP found he had no medical residency, fellowship, doctoral degree or the 15 years of clinical experience he claimed. He attended medical school for a few years but withdrew and didn’t graduate.

His pilot qualifications do not appear to be in question — he holds the highest type of license a pilot can have, a Federal Aviation Administration spokeswoman said. However, United grounded him in August after his medical and doctoral degrees evaporated like contrails of the jets he flew. He resigned in June as an educator and researcher at William Beaumont Hospital in Royal Oak, Mich., after a credentials check revealed discrepancies, a hospital spokeswoman said.

Doctors who worked with the 58-year-old pilot are stunned, not just at the ruse and how long it lasted, but also because many of them valued his work and were sad to see it end.

“I was shocked to hear the news,” said Dr. W. Douglas Weaver, who was president of the cardiology group when it gave Hamman a training contract for up to $250,000 plus travel a few years ago. “He was totally dedicated to what he was doing, and there is a real need for teambased education in medicine,” said Weaver, a pilot himself from Henry Ford Hospital in Detroit.

Even after learning of Hamman’s deception, the American Medical Association was going to let him lead a seminar that had been in the works, altering his biography and switching his title from “Dr.” to “Captain” on course materials. It was canceled after top officials found out.

Now, groups that Hamman worked for are red-faced that they hadn’t checked out the tall, sandy-haired man who impressed many with his commanding manner and simple insights like not taking your eyes off a patient while talking with other team members about what to do.

“This is Your Captain Speaking: What can we learn about patient safety from the airlines?” is how his training sessions typically were billed.

Journals that printed articles listing Hamman with M.D. and Ph.D. degrees are being contacted in case they want to correct the work. Beaumont removed him from a U.S. Department of Defense medical simulation contract that a physician at the hospital had obtained.

Doctors who attended Hamman’s sessions don’t have to worry — the Accreditation Council for Continuing Medical Education will not revoke any education credits they earned.

“That just makes the learners more of a victim,” said the council’s executive director, Dr. Murray Kopelow, adding that this is a first in his 15 years on the job. “Sounds like there’s lots of victims in this case — the learners, the accredited providers, the whole CME system.”

Hamman did not return several phone calls and emails seeking comment. David Nacht, an employment lawyer in Ann Arbor, Mich., acknowledged that his client did not have the medical and doctoral degrees he had claimed from the University of Wisconsin-Madison in the 1980s.

“It’s Mr. Hamman’s desire that he clear up any misconceptions about his background that he has caused. He wants to be completely straightforward about it,” Nacht said.

There is no indication Hamman ever treated a patient, though his teamwork training had him videotaping in emergency rooms and other settings where patients were being treated.

Hamman does have an associate’s degree in general aviation flight technology and a bachelor of science degree from Purdue University. He also has “type ratings” to fly half a dozen very large commercial planes, according to the FAA.

United would not discuss his job history, citing employee confidentiality. But the company confirmed that he is not currently authorized to fly. Hamman lives in Michigan and is based in Chicago.

As long ago as 1992, an FAA workshop listed Hamman as an M.D. from United’s flight center in Denver. In an interview last year with Cath Lab Digest, a publication for heart specialists, Hamman says that being a doctor may have “opened up some doors at United, and I ended up as manager of quality and risk assessment.”

In 2004, he joined Western Michigan University, a Kalamazoo school with a big aviation program in nearby Battle Creek, as co-director of its Center of Excellence for Simulation Research. In 2005, the center got a $2.8 million grant from the Michigan Economic Development Corporation to expand simulation training into medical settings. Matching funds from other groups brought the total to $4.2 million.

Soon Hamman was videotaping heart attack treatment drills and deconstructing what doctors did right and wrong. He spoke at Northwestern University and for the AMA and the American College of Emergency Physicians. In 2009, he joined Beaumont Hospital.

Dr. Sameer Mehta, a Miami cardiologist who runs an annual conference for heart specialists, had Hamman lead sessions in 2009 and earlier this year. He seemed to understand the jobs of the EMS, emergency room and cardiac catheterization lab staff s and how they needed to work together, Mehta said.

“He was able to simulate exactly what we were doing,” and to off er suggestions from aviation to help, Mehta said.

It’s easy for groups to assume someone else has vetted a popular speaker, said Dr. William O’Neill, a legendary cardiologist who spent 17 years at Beaumont before becoming an executive dean at the University of Miami in 2006.

“Somehow you’ve gotten the name or seen them in the literature,” said O’Neill, who has helped with many conferences. When he heard that Mehta and others had been duped by Hamman’s phony degrees, “I thought, ‘There but for the grace of God go I.’”

Hamman’s ambition may have done him in. In checking a grant proposal he wanted to submit in late spring, the Beaumont staff discovered the lack of an M.D. degree, said spokeswoman Colette Stimmell. Hamman resigned June 15.

In hindsight, the careful wording in some of Hamman’s comments is apparent.

“I couldn’t handle a full-time cardiology practice” with the demands of being a pilot, he told at least two reporters.

Less clear is what, beyond basic principles of teamwork, his training really off ered.

“In a sense, he didn’t talk about anything medical,” said Dr. Stephen Mester, a Florida cardiologist who took one of Hamman’s sessions at the cardiology conference in Atlanta last spring. “I did not find it worthwhile, but I believe it could be worthwhile for programs just getting started.”

After fessing up, Hamman asked the AMA and the cardiology group to let him continue, saying, “the work is the work.”

They decided that a lie is a lie.

“He really didn’t need to be a physician to do what he was doing. He could have been successful without titling himself,” said Weaver of the cardiology college. “He made a very serious mistake.”