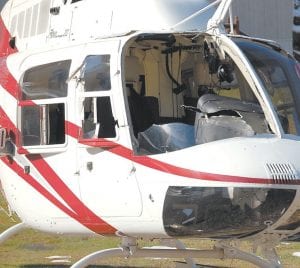 The helicopter’s windshield was broken out when it hit a Kentucky Power Company ‘static line’ while power company and coal company personnel were surveying a transmission line. (Photo by Sally Barto)

A pilot and two passengers escaped serious injury after a helicopter was forced into an emergency landing after hitting a Kentucky Power Company “static line” near Isom.

The 1979 Bell 206B Ranger 3 being piloted by Tim Kearns, 56, of Beaver, W.Va., was under contract to survey power lines carrying service to Metinvest United Coal Co.’s Letcher County operations when it ran head-on into an overhead ground wire located near KY 15 at 11:51 a.m., last Friday. Kentucky State Police said Kearns was able to make an emergency landing near the parking lot of a small shopping center which houses Dollar Plus, East Kentucky Tobacco and Paradise Pizza.

Kearns suff ered a cut above his right eye when the helicopter’s windshield was broken when it hit the static line, which is suspended with three other wires used to transmit power. Neither of the two passengers — Mike Lasslo, manager of distribution and customer services for Kentucky Power’s Hazard District, and Charles E. “Ed” Toppings, United Coal’s vice president of maintenance systems — were injured in the accident.

State police said two vehicles received minor damage when they were hit by the fallen static line. The wire hit and damaged the windshield and mirrors of a coal truck owned and operated by Joey Ramsey of Raymond’s Branch in Dry Fork.

Adrian Collins, an employee at Paradise Pizza, said he heard the helicopter and walked outside to see it flying about 25 feet off the ground.

“The electricity went off and it sounded as if the helicopter was landing on the building,” said Collins. “I went outside and he was approximately 10 feet from hitting our building. He came across the building and landed in the parking lot.”

Collins said Kearns had to crawl across to the passenger side to get out of the helicopter. Kearns was treated for his injuries at the Whitesburg hospital and later released.

State police and federal agencies are continuing an investigation into the accident.