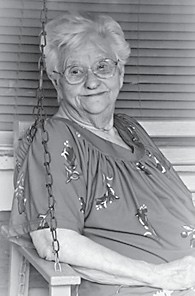 Funeral services for Pina Gibson, 97, were held December 4 at the McRoberts Old Regular Baptist Church. She died November 30 at her home, also in McRoberts.

Burial was in the Branham Cemetery at McRoberts. Letcher Funeral Home, Whitesburg, had charge of the arrangements.