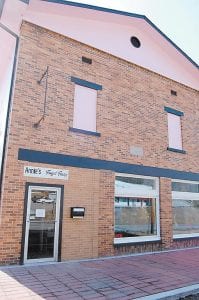 A Whitesburg consignment shop has moved to larger quarters, just in time to handle the dramatic increase in sales the business has seen in a time of economic uncertainty in Letcher County.

Annie’s Frugal Finery has moved from its second location near downtown Whitesburg to the old Masonic Lodge at Pine Mountain Junction. Owner Debbie Campbell said sales have grown by about 20 percent during a year in which families have tightened their budgets because of the slumping coal industry.

“We really just exploded,” said Campbell. “I think the economy has definitely helped some because people are seeking ways to get better deals.”

Campbell said her consignment shop offers customers nicequality items at a third of the price charged at fine retail stores.

“We are seeing a lot of people who originally may not have been consignment-type shoppers and have come in and seen a niche where they can get things at a better quality and price,” she said. 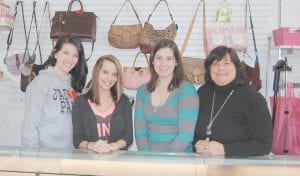 In addition to a rise in sales, the number of consignors, people who bring items to the shop to sell, has increased. The clothing must be either “gently worn” or new, and Annie’s Frugal Finery receives 50 percent of the monetary amount for which items are sold.

“They may have items that they no longer need, use or want,” said Campbell. “It’s sort of like recycling and gives other people the opportunity to purchase those items.”

When Annie’s first opened in October 2009, the shop was stocked with merchandise belonging to nine family members and friends. In the first three months, the number of consignors had grown to 180. Annie’s now has almost 2,000 consignors. The most successful has earned about $8,000 since May 2010.

“We have some folks who really like to shop,” said Campbell. “With us taking 50 percent, you will still get more than you would at a retail website or yard sale.” 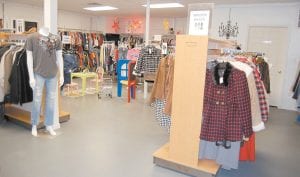 The first floor is stocked with “gently used” and new items for sell.

Campbell said 25 percent of items brought into the store still have price tags attached or don’t have tags but have never been worn.

“Either people get stuff as gifts or buy something and get home and decide they don’t like it or items no longer fit,” she said.

Many consigners bring new items that might have been given to them as gifts.

“They don’t want to return items so they consign,” said Campbell. “It’s a good way to anonymously make money and not offend those who gave you the gift. All consigning is anonymous.”

Purses, women’s tops and women’s pants are the biggest sellers. Some of the top brands sold are Hollister, Abercrombie and Aeropostale.

“If you go to a mall you have spent $60 to $100 on a few items,” said Campbell. “You come in here and you are going to get twice as much. Going to the mall is a twohour trip. You are talking about a lot of gas and wear and tear on a vehicle.” 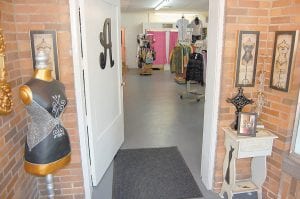 The entrance to Annie’s Frugal Finery is shown in this photo. The first floor contains women’s, men’s, and children’s clothing and other items. Three changing rooms are also located here.

Campbell said she and other employees at the shop take care of consignors’ items and sell the items as if they are their own.

“When they are in excellent condition, no one knows you bought it from consignment,” she said.

After 90 days many of the items which remain unsold are donated to a local charity, Helping Hands, which is located in the old vocational school building in Whitesburg.

“If they don’t sell, they are going to go to a good cause,” said Campbell. “It stays in the county.”

Items that are priced at more than $50 are returned to the owner.

Dream almost went up in flames

Campbell nearly gave up the dream of owning a consignment shop after the first building, then located in West Whitesburg, and its contents were destroyed in an electrical fire on January 13, 2010. 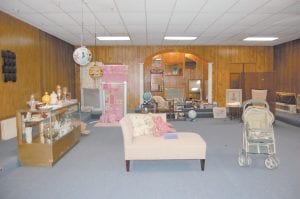 The building’s upstairs is occupied by the furniture and household section, a popular new addition to the consignment shop located at Pine Mountain Junction.

“Initially, I was in shock,” she said, adding that she did not have insurance other than $20,000 to cover a loan.

A few people posted accusations about the shop and the fire on a website where users can post whatever charges they wish, even if they’re false.

“People thought I had collected money from the fire,” said Campbell. “They thought we had gotten some big settlement and ripped people off. It was pretty devastating to say the least.”

Campbell said she received about 100 e-mails and phone calls from people with words of encouragement and concern and eventually decided to rebuild her business.

“I had seen enough initial success at the first business,” she said. “If we could find another place, we would be successful again.” 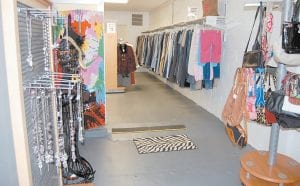 The misses department is also on the first floor.

By 2012, business was doing so well that more space was needed. Campbell and her husband Frank bought the former Masonic Lodge building located near Pine Mountain Junction.

“We plan on being in the community for a long time,” said Campbell. “By buying the building, we feel like we have made a commitment.”

Months were spent remodeling the 6,000-square-foot, two-story building, while the former location stayed open. New windows and doors were installed in the front of the building. Carpet was ripped up and wall paneling was removed. A new ceiling was built. More lighting was added. A wall on the lower level was taken out and a concrete floor was poured.

“It’s a larger area than it used to be,” said Campbell. “It’s totally different.”

Annie’s Frugal Finery opened in the new location on February 4.

“We were absolutely slammed,” said Campbell. “We had so many people parked in here that it was backed up. It was absolutely crazy and it was like that the entire week. It was insanity.”

The lower level of the consignment shop consists of clothing for men, women and children. Jewelry, purses and other accessories are also located downstairs.

Because of the extra space, a furniture and household section was added upstairs.

“So much interest was generated from adding that section,” said Campbell.

On the first day at the new location, a vanity, a nightstand, two Thomas Kinkaid prints and three bedding sets were sold.

“We have sold 10 bedding sets in three weeks,” said Campbell. “… The first three days we opened we sold every piece of furniture we had,” she said. “I think there is a real need in our area to get nice, quality household items.”

Space upstairs is also used as a processing center and office. A room for tuxedo rentals and fittings is also upstairs. The tuxedos are from Sam Meyers Formal Wear.

Campbell is surprised by how quickly the shop has taken off.

“When I opened the first one I thought we would be okay,” she said. “I never thought it would grow to this extent. I don’t think we have reached our highest point by any means.”

Campbell expects to see more growth as a result of the expanded location.

“It would not surprise me at all to double the number of consignors,” she said.

Annie’s Frugal Finery is the only pink business in town.

“Pink is sort of our trademark color,” said Campbell. “We found that when we painted our building pink for Breast Cancer Awareness Month, it touched the hearts of our customers.”

The pink exterior at the second location drew so much positive feedback, Campbell said she decided to also paint the new location pink. The distinctive color also helps when giving out-of-town customers and consignors directions to the shop.

“It makes it easy for people to spot,” said Campbell.

More work will be done to the exterior of the building this spring. Annie’s Frugal Finery’s logo of a girl shopping in Paris will be painted one side of the building by a local artist.

The logo comes in part from a trip in November, when Debbie Campbell, her daughter Annie Campbell, Katie Caudill and Sara Estep, all who work at Annie’s Frugal Finery, traveled to Paris, France and Rome, Italy.

Campbell said the logo reminds her of that trip and helps define Annie’s Frugal Finery as “a classy boutique.”

Campbell said when a consignor brings in a certain brand of merchandise it is common for an employee to call a regular customer who likes that brand and let the customer know that new items have arrived.

“Most of the time my girls are good with saying we just got this in and it would go good with this top,” said Campbell. “I think customers really appreciate that.”

Campbell, a former teacher, enjoys shopping with daughter Annie, 19. After shopping at consignment stores in other towns, Debbie Campbell thought one was needed in Letcher County and named it in honor of her daughter with the intention of one day turning the business over to her.

But Debbie Campbell isn’t ready to step down quite yet.

“I plan to do it for a while. I like it,” she said, adding that she also enjoys working with her daughter.

“She is actually my right arm as far as working together,” said Campbell. “She is very, very reliable. She is very steady. She is great with customers. She really loves this business and I think it shows.”