I met her in a green room, which, like so many others, wasn’t even green. The woman doing makeup had no idea who she was and neither did the camera man, but they knew I was going on first, to discuss some OJ-like topic of no real importance, so they asked her to get out of the makeup chair so I could be “done” first.

Reverse order of importance, I said, apologizing, but she shook her head, unconcerned. It didn’t matter. She had manners, grace and patience.

She had gone to school with my ex-husband, and I’d heard stories of her from him. I mentioned his name and she smiled. He knew her as “Pinky.” I should give him her best. Did we have kids? We did, almost the same age as hers. And off we went, on the topics women talk about, even, maybe especially, powerful and ambitious women – about our kids and the burdens on them, and trying to balance the different levels of responsibility you feel.

She was raising her children alone in Dubai. It was safer for all of them there and the children liked it, but she longed to return to Pakistan, to resume her role in politics, to re-engage in the struggle that she hadn’t so much chosen as been born into. 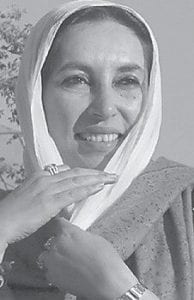 She waited. But the time was never quite right.

The man who was with her asked if they could possibly change the station to see if they could find some international news, news of the troubles in their part of the world. Switch away from the latest coverage of a guy who got away with murder and kept getting in trouble, or a blonde from somewhere in Middle America who was missing? Sure, we said. Anything you want. Somehow they found a station broadcasting pictures of fighting and bloodshed. This is it, the man said. We all watched for a few minutes. It wasn’t the sort of place children growing up in safety would long to be. Or have their mother be. That was the problem.

I had just finished writing a book about Hillary Clinton, which I promised to send her and did. The book tour had been tough; even I was surprised by how much antipathy there was to the idea of Hillary as president. Did Americans really have so much trouble with the idea of a strong woman leader? Did they really see ambition in a woman as being so different from that in a man? Even here, where it was – almost – safe?

She went to the ladies room and the crew asked me who she was. I’m always nice to people, but with her I had been more than nice: deeply respectful, intentionally deferential. You think I’ve got a lot on my plate, that I take a lot of abuse, I said. My life is easy. I saw my father die at the same age she lost hers, but I didn’t see mine executed. I have tried to follow in my father’s footsteps, in the sense of pursuing justice, but the path is not crowded with killers willing to risk their lives to kill me.

That’s Benazir Bhutto, I explained. That’s what her life is. Or was. May she rest in peace. She was a courageous woman and a mother who loved her children. Her country will miss her, and so will they.

Pinky. Such a girlie name for a woman of courage. Such a clear testament to the fact that little girls who get their nicknames from their rosy complexions can grow up to be women who are willing to risk their lives for their country.