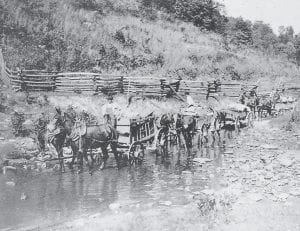 WAGON TRAINS – This photo provided courtesy of Judith Vermillion illustrates the mule-drawn wagon trains which were the most common mode of transporting goods in the remote areas throughout the mountains. The photo was given to her by her mother, Geneva Picklesimer, who lived in Johnson County, and was taken in 1896 on Johnson County.

One of the most colorful eras in the history of Letcher County was the period ca. 1890-1912. From the time the early settlers came into the region in the early 1800s, the people lived off the land. During the westward migration from the Carolinas through Virginia and into Kentucky, they passed over the Cumberland Mountains through various gaps in the ridges.

In eastern Kentucky they found pristine streams, vast timberland, abundant wild game and fertile soil for farming. It was a paradise. The western frontier was sparsely populated but there was abundant land so migration continued into the region for generations.

The pioneers were a hardy breed who utilized their hard manual labor, their stubborn will and creativity to provide for their everyday needs. A large family was an asset. Some became merchants, setting up small general merchandise stores in the mouths of hollows and providing a venue for bartering. Communication with the outside world was minimal.

Around 1912 the railroads inched their way into Letcher County primarily to transport the vast and rich coal resources from the region. The L&N Railroad was extended through Whitesburg to the headwaters of the Kentucky River at present day Hemphill, McRoberts and Haymond. The C&O Railroad was extended up the Sandy Valley through Pikeville, Shelbiana, through Shelby Gap to present day Jenkins. The railroads not only provided a means for shipping coal and timber out of the region, they also provided means for shipping goods into the region and for transporting people in and out of the region. The region flourished.

During the early 1890s the railroads were built into southwest Virginia. Norton, Va., owes its existence to being the junction of the Louisville and Nashville Railroad and the Norfolk and Western Railroad (later renamed the Clinchfield Railroad).

In 1891 the L&N came through the Cumberland Gap to the Powell Valley region, through Big Stone Gap, Appalachia and to Norton, which was then known as Prince’s Flatts. Meanwhile, the N&W was extended from Bluefield.

The railroads opened up the southwestern region of Virginia to capitalize on minerals, timbers, agriculture, and passenger service. This was 20 years before railroads came to Letcher County. At Appalachia, Va., a rail spur was built northward toward Black Mountain to present day Stonega. When merchants and farmers in Letcher County learned of the new railroad they began making regular trips there to barter their excess farm produce and purchase bulk items for the general merchandise stores.

The journey, which many times took a week for a round trip, was known as the Stonega Run. Some wagons were sent there empty to load up with barrels of sugar, salt, coffee, flour and dry goods. Other wagons went there with farm produce, molasses, hides and moonshine to sell or barter then bring back barrels of bulk items. The new coal camp in Stonega provided the farmers a market for their fresh farm produce.

From the Whitesburg area the shortest route across Pine Mountain was via Scuttle Hole Gap. The northwest side of the mountain is especially steep because of a geological fault which occurred millions of years ago when Pine Mountain was formed. The pioneers built a wagon road up the treacherous side of the mountain following an old buffalo trace. After they passed through Scuttle Hole Gap, the trail split with a more direct route for those on horseback along Joe Day Branch but the wagon road winded slowly down the south side of the mountain, through the Cumberland Valley at Eolia and over Black Mountain to Stonega, Va.

The population grew rapidly as coal companies developed mines and built coke ovens to feed the hungry steel mills in the industrialized eastern cities. Hundreds of families moved into the new company-owned towns for new jobs. The workforce consisted of native-born white, European immigrants, and southern Negroes. To the native-born whites, the work was tough but still a step up from the subsistence farming to which they were accustomed.

The coal camps provided a ready market for the Kentucky farmers to sell their extra produce. They set up as street vendors and peddlers for days, then purchased bulk items to haul back across the mountains. The round trip sometimes took a week or more. Farmers and merchants formed wagon trains or convoys to travel together for security reasons and also to help each other. Some of the roads were so steep and the load was so heavy that one mule skinner would park his wagon and use his mule team to help pull a neighbor’s stalled wagon.

Some of the merchants would make a quick trip by going to Stonega with an empty wagon and returning loaded. They would take a spare team of mules to help pull the loaded wagons back up the mountains. Not only was it a problem getting a loaded wagon up a mountain, but it was equally difficult to keep a loaded wagon from running away going down the steep mountains. Some would tie chains around the wheels to keep them from rolling and slide them down the steep inclines. Others cut trees and chained them to their wagons to slow their descent.

Archie Fields of Cowan recalls working in his grandfather’s store when he was a kid and hearing stories about the Stonega Run. Crocket Mart Fields General Store was at the mouth of Scuttle Hole Gap Hollow. He sent empty wagons to Stonega regularly to haul barrels of goods for his store. The run took about three days. Archie recalled a story about an incident when a wagon loaded with barrels of flour ran away and wrecked coming back down Pine Mountain. The barrels of flour burst and the wind blew the flour all over the side of the mountain. They said it looked like a snow in the middle of July.

Invariably the trip would require overnight accommodations. An old Negro named Daniel Richmond, a freed slave, owned a farm on the mountain and provided a way station for the weary travelers. He provided a livery stable for the mules and the men were provided a place to sleep in his home or barn.

Bessie Hamilton Shepherd of Whitesburg recalls stories told by her grandmother, Matilda Whitaker Back. “Sometimes the wagons were gone so long that a family member would have died and been buried before they returned and there was no way to notify those on the run.”

Creda Isaacs, president of the Letcher County Historical and Genealogical Society, recalls stories passed down by her grandfather, Elijah Willis Baker, who had a general merchandise store at Millstone. Because Pound Gap was closer than Scuttle Hole Gap, he sent wagons through this gap over Pine Mountain then across Indian Creek Mountain to Norton, Va., to buy produce shipped in railroad boxcars.

Among the more frequent travelers through Scuttle Hole Gap were the mule teams hauling for the Lewis Brothers Company in Whitesburg. Martin “Mart” Lewis and his brother James established the business in 1892. Stuart Lewis of Knoxville, Tenn., is a great-grandson of Mart Lewis. He provided a copy of an article published in The Mountain Eagle in February 1989. “The store carried practically everything a rural community could want – hardware, dry goods, old and new varieties of canned goods.”

In 1909 the Lewises formed the Lewis Wholesale Company “to add a wholesale component to their retailing. Smaller stores in the outlying areas were encouraged to purchase some of the Lewis stock at below retail prices and to make requests when the Lewises sent their wagon to Stonega, Va., (then the nearest railhead) for more goods and supplies. They kept a long line of teamsters ready to haul goods from Stonega in Wise County, Va., a round trip of two or three days.”

Noted poet, author, songwriter and playwright Jenny Galloway Browning collaborated with Dock Frazier of Cowan to record oral histories about the Stonega Run. They were so intrigued by the stories they wrote several songs about real people and happenings and released a CD, “Stonega Run”, in 1994.

Dock and his singing partner Clyde Stanley began performing the songs at live shows and telling the stories behind the songs. “The audience loved it!” says Jenny. “So we decided to write a play using all of the material we had gathered up that wouldn’t fit into the songs. The songs were included in the play (Dock and Clyde performed them live) as well as the very real story of Stonega Run.

“Vernon Maggard, whose father and grandfather made the trip regularly (and who played the part of his grandfather in the play), told us that his grandmother used to warm rocks in the fireplace all night, then wrap the rocks in cloth for her husband and son to put their feet on when they headed out on the run.”

The play was performed six nights in 1995 at Southeast Kentucky Community and Technical College, Cumberland Campus when Jenny was artist in residence there.

The pace will be slow to moderate so folks of all ages can participate. Along the way some of the participants will provide a living history of the Stonega Run. After the hike some will drive along the Little Shepherd Trail and stop at scenic overlooks. Bring your camera.

You don’t want to miss this opportunity. For additional information, please call Ked Sanders at (606) 832-4122.