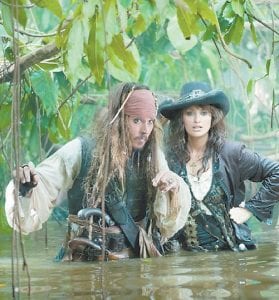 Johnny Depp, left, and Penelope Cruz are shown in a scene from, “Pirates of the Caribbean: On Stranger Tides.” (AP Photo/Disney)

A momentous finale lies ahead for Hollywood this year. “Harry Potter and the Deathly Hallows: Part 2” is the biggest screen farewell since the final “Star Wars” movie, closing out a decade of adventures for the young wizard.

Then there’s that vampirewerewolf schoolgirl love triangle. “ The Twilight Saga: Breaking Dawn — Part 1” is the next-to-last installment in that series, with the finale due out in 2012.

As those franchises wind down, others are recharging. The original “Pirates of the Caribbean” trilogy sailed into the sunset, but a new voyage now looms. The “Shrek” series has finished, but feline hero Puss in Boots sets out on his own in a spinoff.

And plenty of other big-screen regulars are coming back throughout 2011.

There are action followups with sequels to “Transformers,” ‘’Mission: Impossible,” ‘’Sherlock Holmes” and “The Fast and the Furious,” plus prequels to “X-Men” and “Planet of the Apes.” Comedy revisitations with sequels to “The Hangover” and “Big Momma’s House.” A family film motherlode with continuations of the “Cars,” ‘’Kung Fu Panda,” ‘’Happy Feet” and “Alvin and the Chipmunks” stories, along with new takes on “ The Muppets,” ‘’ The Smurfs” and “Winnie the Pooh.” Reboots with an English-language version of “The Girl With the Dragon Tattoo” and remakes of “Arthur,” ‘’The Three Musketeers,” ‘’The Thing” and “Footloose.”

For Harry Potter, “ Deathly Hallows: Part 2” picks up where the first chapter ended, with evil Lord Voldemort (Ralph Fiennes) hurtling toward a final showdown with the teen wizard. Daniel Radcliffe, who has played Harry through the eight-film saga, figures that much as the young hero wants to defeat Voldemort, he also has a bit of a martyrdom fixation, maybe even a death wish. “Harry Potter” creator J.K. Rowling has “said the difference between Voldemort and Harry is that Voldemort is terrified of death, and Harry is not afraid of it,” Radcliff e said. “I actually go on further than that. I think Harry has kind of been seeking death for quite a long time just to get him out of the unending tragedy that his life has become. “It’s his friends in this film that kind of manage to pull him out of that self-centered, burning, martyr arena.” Here’s a month-to-month look at Hollywood’s 2011 highlights:

Vince Vaughn has to break the news to his friend (Kevin James) that his wife’s cheating on him in “The Dilemma,” director Ron Howard’s return to comedy after such dramas and thrillers as “A Beautiful Mind” and “The Da Vinci Code.” “People had been nudging me for quite a long time to try to find another comedy. When I came across this story, with all its twists and turns, along with the comedy, I thought it could be something fresh and original,” Howard said. “Seeing Vince Vaughn navigate these waters, that’s what’s fun about it.” Also coming: Seth Rogen and Cameron Diaz’s crimefighting caper “The Green Hornet”; Natalie Portman and Ashton Kutcher’s romance “No Strings Attached”; and Anthony Hopkins’ exorcism tale “The Rite.”

Valentine’s weekend brings romance: “ Just Go With It,” a comedy of errors starring Adam Sandler and Jennifer Aniston; and “Gnomeo & Juliet,” an animated tale featuring the voices of James McAvoy and Emily Blunt in a take on Shakespeare’s love story — told with garden gnomes.

Space invaders mess with humanity in “Battle: Los Angeles,” starring Aaron Eckhart as a Marine sergeant on a mission amid the chaos of extraterrestrial assault.

“Aliens are coming out of Santa Monica Bay. All hands on deck, he’s got to take a young squad of Marines behind enemy lines to rescue some civilians,” Eckhart said. “This is house-to-house urban combat. With aliens.”

“Arthur,” a remake of the 1981 comedy, stars Russell Brand as a rich bad boy and Helen Mirren as his nanny, a gender switch on the original, which featured John Gielgud as Arthur’s valet.

“’Arthur’ is a beloved film, and you remake something like that at your peril,” Mirren said. “The only thing you can do, really, is to make it your own, and I think that was one of the ways that they made it their own and made it modern and up to date.”

Hollywood tears into the busy summer season with three big sequels: a second helping of bachelor bash chaos with Bradley Cooper, Ed Helms and Zach Galifianakis’ “The Hangover Part II”; Jack Black’s animated action comedy “Kung Fu Panda: The Kaboom of Doom”; and “Pirates of the Caribbean: On Stranger Tides,” with Johnny Depp and Penelope Cruz in search of the Fountain of Youth.

“I thought the writers, after three big films, had probably exhausted every pirate thing that they could write about,” said Geoffrey Rush, reprising his role from the original “Pirates” trilogy. “But this feels like a fresh script, and

(Continued on Page B4 ) we’ve got a load of fabulous new characters.”

The Pixar Animation masters — makers of “Toy Story 3,” ‘’Up” and “WALLE” — are back in sequel mode with “Cars 2,” as race car Lightning McQueen (voiced by Owen Wilson) heads to Europe for a Grand Prix adventure.

Along with the “Harry Potter” finale, the mammoth month features more shape-shifting robots with “Transformers: Dark of the Moon.” Star Shia LaBeouf said the franchise’s third chapter will outdo the first two for wild action.

“It’s the most physical I’ve ever been in my entire life,” LaBeouf said. “It’s going to be the craziest action movie ever, or we failed.”

Emma Stone, Viola Davis and Bryce Dallas Howard star in “The Help,” based on the best-selling novel about a budding white writer who collects the stories of black maids in the South as the 1960s civil-rights movement brews.

It’s remake month: Newcomer Kenny Wormald and Julianne Hough star in “Footloose,” about a young rebel who challenges a town’s ban on dancing; “The Thing” features Mary Elizabeth Winstead and Joel Edgerton as Antarctic explorers battling a deadly alien lifeform; and “ The Three Musketeers” is an update of the swashbuckling classic whose cast includes Orlando Bloom and Milla Jovovich.

The holiday season brings part one of “Breaking Dawn,” the finale to author Stephenie Meyer’s supernatural romance that began with “Twilight.” Kristen Stewart’s back for the closing round in her tornbetween two-lovers relationship with her vampire beau (Robert Pattinson) and werewolf pal (Taylor Lautner).

Also coming: Adam Sandler in dual roles for the comedy “Jack and Jill”; Ben Stiller and Eddie Murphy’s crime romp “Tower Heist”; and the big-screen return of Kermit the Frog and friends with “The Muppets.”

Holmes and Watson ( Robert Downey Jr. and Jude Law) meet criminal mastermind Moriarty in “Sherlock Holmes II.” Downey, whose 2010 sequel “Iron Man 2” was a critical letdown despite its commercial success, said the filmmakers are working hard to keep their take on Holmes fresh.

“We’re really trying to be careful and thoughtful,” Downey said. “It’s a bit of a victory dance, but then you can still not pay enough attention and have your shoelaces tied together and make an ass of yourself the second time around, making people question why they put you in the position to come do a victory dance, anyway.”

Steven Spielberg delivers two films: “The Adventures of Tintin: Secret of the Unicorn,” his collaboration with Peter Jackson to adapt the books of author Herge about a daring young reporter; and “War Horse,” chronicling a horse’s experiences amid the slaughter of World War I.

Also coming: Daniel Craig and Rooney Mara star in Hollywood’s take on “The Girl With the Dragon Tattoo”; Tom Cruise returns to action for “Mission: Impossible — Ghost Protocol”; Martin Scorsese directs the family adventure “Hugo Cabret”; and the talking rodents are stranded in “Alvin and the Chipmunks: Chipwrecked.”