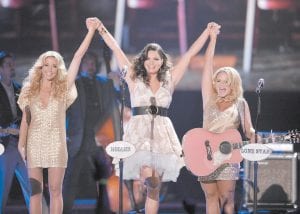 When the women in Pistol Annies get together, song ideas just fall out.

They spent two days together recently to do promotional work for their new album, “Annie Up,” and had the makings for eight new song ideas— practically a whole album — by the afternoon of the second day.

“Somebody can just say something, we write it in our phone and it becomes a song,” Miranda Lambert said. “Like the other day I said, ‘My mom’s wine store would probably do way better in our Baptist town if it had a back door.’ So now we’ve got ‘Back-door Bar.’ As simple as that it can be.”

“We all have a Pistol Annies folder on our iPhones,” Ashley Monroe said. “They just seem to write themselves when they’re ready.”

Spend a little time around Lambert, Monroe and Angaleena Presley and you get a glimpse of what those writing sessions might be like. They move in a swirling, laughing diamond- and metal spike-studded pack. It’s clear the three love each other’s company and jokes come fast and furious.

Ask them what each brings to the group and you should know you’re not going to get a straight answer.

That kind of chemistry pulled the solo artists together to form the Pistol Annies three years ago. And after a soft release on their runaway debut “Hell on Heels,” they’re now a fully realized group with an appearance-filled rollout for the new album, a radio campaign, a music video, a summer tour and a lot of momentum.

Lambert got the trio its initial meeting with Sony Music Nashville — she is Miranda Lambert, after all. But it was up to the group to prove itself from there. And it did far beyond expectations, disproving a couple of country truisms along the way. Fans found and downloaded the Annies’ digital-only debut on the Internet — about 500,000 copies so far — even though it is assumed most country listeners aren’t tech savvy. And the group found that widespread audience despite issuing no single to country radio, thought to be the traditional driver in the genre’s marketplace. Radio eventually caught on and started playing the music anyway.

“Every artist has to prove themselves and just because (Lambert is) freakin’ nominated for everything and stuff, as a group we aren’t,” said Presley, who grew up in the community of Beauty, Ky. “We had to do what every new artist had to do. We’re a baby band. We had to prove ourselves.”

“But it’s also interesting because we’re like a baby band, but we didn’t really go on tours to build up our (profile),” Lambert said. “There’s not really a rule book and our manager is kind of scared sometimes because it’s like there’s nothing to compare it to. You can’t say, ‘Well, they did this and it ruined their career,’ ‘They did this and it shot them to stardom.’ It’s, like, ‘We don’t know what the hell we’re doing.’ But we just know the music’s good and we want people to hear it.”

Those who listen to the 12 songs on “Annie Up” will find a group that’s gaining confidence with each new song and performance. Laced with humor and poignancy, the songs are both sassy and deep, finding the humor in even the toughest of circumstances.

They sing about family secrets (“Hush Hush”), the downside of beauty (“Being Pretty Ain’t Pretty”), low-life men (“Unhappily Married”), the occasional man who lives up to their standards (“Loved By a Working Man”) and sin. So much sin (“I Feel a Sin Comin’ On,” ‘’Dear Sobriety” and “Blues, You’re a Buzzkill”).

They share the songs on stage, taking turns on lead vocal and blending into the background harmony. Monroe thinks they’ve even started to sound alike. By the time you hear a song, it’s hard to pick out who wrote what and who’s singing where.

It goes back to that chemistry thing.

“It makes me mad sometimes,” Presley said. “I’ll think nobody will ever think of anything better than I just said and then (Monroe) will be like, ‘Look!,’ and I’ll be like, ‘That’s so much better!’”

“We also challenge each other as songwriters,” Monroe said. “We know we have to be on our A game.”

“I won’t sing them a song I wrote by myself unless it’s something I really, really like because they’re great and it’s good to be around people like that,” Lambert said. “Angaleena says, ‘If you don’t grow, you die.’”