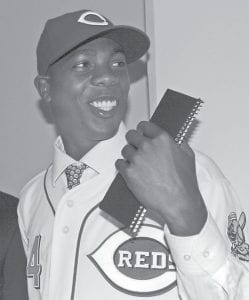 Aroldis Chapman, from Cuba, broke into a smile after a news conference earlier this week in Cincinnati, where the Cincinnati Reds announced they had signed Chapman to a six-year contract. (AP Photo)

Aroldis Chapman knew so little about baseball in the United States that before he could pick a team, he had to look at a map. The lefthander from Cuba had never seen a major league game on television and couldn’t name all the teams.

He finally settled on one that wears a distinctive “C’’ on its red cap, like the one he left.

Chapman agreed Monday to a $30.25 million, six-year contract with the Cincinnati Reds, who view him as an important addition to their rotation down the road. The small-market club with limited payroll enticed him to Cincinnati, where he took a physical, signed a deal and saw snow for the first time.

“When you look at the size of the market we are here in Cincinnati, we have to take some bold moves from time to time to try to improve this franchise,” general manager Walt Jocketty said. “We felt this was a very significant move.”

Very surprising, too. Depending on when he becomes eligible for salary arbitration, Chapman could earn millions of dollars more.

Agent Randy Hendricks said eight teams were in the running to sign Chapman, who turns 22 next month. It came down to Cincinnati, Oakland and another team whom the agent wouldn’t identify.

Chapman defected in July at a tournament in the Netherlands, leaving the Cuban national team known as international baseball’s Big Red Machine because of its uniforms and its domination. He established residency in Andorra so he could choose his team as a free agent and not be subject to baseball’s draft.

The hard-throwing pitcher didn’t see major league games on television in Cuba, so he was unfamiliar with teams and where they were located.

“We took him through a Google map that showed every major league club, and we could zoom in on a state and describe the teams,” Hendricks said.

Chapman gained some notori- ety during the World Baseball Classic in March, when he pitched well against Australia and poorly against Japan. His fastball occasionally topped 100 mph, getting the attention of major league scouts.

He also attended several workouts for scouts, including one in Houston that got the Reds deeply interested. Once he learned about the Reds, Chapman became interested in them.

“In terms of the transition, we couldn’t look for a better place for someone who came from Cuba to pitch,” Hendricks said.

The Reds are expected to trim their payroll from the $72.7 million ending figure for last year. They drew 1.7 million fans during their ninth straight losing season, their smallest attendance figure since 1986.

“Financially, it works for us,” Jocketty said. “It does not impact our major league payroll this year in a significant way. It’s a deal that will be paid out over time. We’re thrilled.”

Jocketty said it’s too soon to tell whether he will be a candidate for a starting job with the Reds this spring, or whether he’ll need time in the minors to continue working on his delivery. Chapman, who also pitched in relief for Cuba, will be groomed for the rotation.

“I think that’s where his future is,” Jocketty said. “We see him as potentially a top-of-the-rotation starter at some point.”

The Reds have Aaron Harang and Bronson Arroyo under contract through next season, with club options on both for 2011. Johnny Cueto, Edinson Volquez and Homer Bailey are just starting their major league careers. Volquez is returning from reconstructive elbow surgery that will sideline him for at least the start of the season.

Chapman was a first baseman primarily until he was 15 or 16, when a school pitching coach suggested he convert to pitching. By the 2005 season, he was 18 and pitching for Holguin in the Cuban national league.

The Reds are going to work on Chapman’s delivery. They sent two scouting representatives to his workout in Houston and came away impressed that he seemed to have made some changes already. Chapman also is working on a curve and a changeup.

“What we think he needs now is some refinement in his delivery, because everything else is there,” Jocketty said. “This is a talent that doesn’t come along very often.”