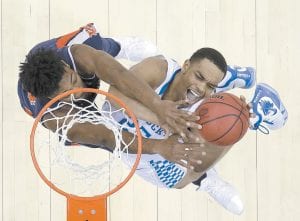 “He’s a handful,” Auburn coach Brue Pearl said about PJ Washington after the Tigers upset Kentucky in the NCAA Tournament. “We tried to double him sometimes. We fouled him a lot.” (AP Photo)

PJ Washington left it all on the court in what could have been his final game at Kentucky. Although a national championship would have been icing on the cake, Washington did his best to carry the Wildcats on his shoulders in Kansas City.

“I just tried to go out there and give it everything I had,” he said. “Unfortunately, we came up short, but I can live with it because I gave it everything (I had). I feel like my teammates did, too.”

Minutes after Kentucky’s 77-71 overtime loss to Auburn, Washington said he didn’t know if he would be back for a third season. Washington declared for the NBA Draft last year but opted to return and is considered by many analysts to be a first-round draft pick this summer.

The sight of Washington even playing in the NCAA Tournament wasn’t even considered a possibility after the sophomore forward sprained his foot in a loss to Tennessee in the Southeastern Conference Tournament semifinals two weeks ago in Nashville.

Washington watched from the sidelines with his left foot in a cast as the Wildcats destroyed Abilene Christian and edged Wofford in the first two rounds of the tourney in Jacksonville.

Everything changed when the cast came off last week. Washington scored 16 points in a win over Houston Thursday night and had a double-double with 28 points and 13 rebounds in the loss to Auburn, a loss that was painful for Washington and the rest of his teammates.

“Auburn just beat us,” said Washington, who admitted his injured foot was in pain following the contest. “They played harder than us and I felt like they wanted it more,” he said. “I felt like all the hard work we put in went down the drain. Everybody worked too hard to be here and it (hurts) that we didn’t get there.”

“He’s a handful,” he said. “We tried to double him sometimes. We fouled him a lot.”

The fact that Kentucky was in contention for a Final Four berth was in doubt after the Wildcats opened the regular-season with a humiliating 118-84 loss to Duke in the State Farm Champions Classic. From that point on, just one of Kentucky’s last six defeats was by a double-digit margin. Kentucky rebounded from all five setbacks and even pieced together a 10-game winning streak after a two-point loss to Alabama in the Southeastern Conference opener.

“We came a long way in such a short time,” Washington said. “We put in a lot of work and everybody bought into it and the process. Nobody complained about it. Everybody just trusted each other and wanted it for each other.”

Even though Kentucky fell short of reaching the pinnacle in college basketball, Washington had no regrets in returning for a second season. He praised his teammates, coaches and the team’s medical staff and added Kentucky had a “great season.”

“I love everybody here and I appreciate everything everybody has done for me,” he said. “I love my teammates. They love the game of basketball and love each other and will do another for each other.”

Although Washington’s future plans remain uncertain, he offered a few words of advice for the team’s returnees to consider next year.

“Cherish this moment right here and just keep fighting,” he said. “At the end of the day (just) remember this moment and use it as motivation.”