Placebo power behind many ‘cures’ 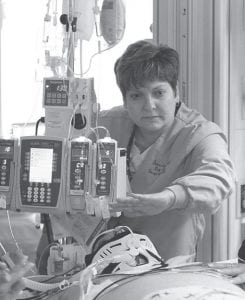 Nurse Donna Audia performed Reiki on a patient at the University of Maryland Medical Center in Baltimore in this file photo. The patient was too sedated to remember his treatment with Reiki energy therapy, but his wife thinks it helped. (AP)

EDITOR’S NOTE: Ten years and $2.5 billion in research have found no cures from alternative medicine. Yet these mostly unproven treatments are now mainstream and used by more than a third of all Americans. This is one in an occasional Associated Press series on their use and potential risks.

People looking for natural cures will be happy to know there is one. Two words explain how it works: “I believe.”

It’s the placebo effect — the ability of a dummy pill or a faked treatment to make people feel better, just because they expect that it will. It’s the mind’s ability to alter physical symptoms, such as pain, anxiety and fatigue.

In just the past few weeks, the placebo effect has demonstrated its healing powers. In tests of a new drug to relieve lupus symptoms, about a third of patients felt better when they got dummy pills instead of the drug.

The placebo effect looms large in alternative medicine, which has many therapies and herbal remedies based on beliefs versus science. Often the problems they seek to relieve, such as pain, are subjective.

“It has a pejorative implication — that it’s not real, that it has no medicinal value,” said Dr. Robert Ader, a psychologist at the University of Rochester in New York who has researched the phenomenon.

But placebos can have real and beneficial effects, he said.

“Much of the results of certain alternative procedures are largely placebo effects, unless you believe there are people who exert magical powers so they can hold their hands over your body and cure you of disease,” Ader said. “Make you feel better? That’s entirely possible, especially if you believe it.”

The placebo effect accounts for about a third of the benefits of any treatment — even carefully tested medicines, scientists say. This dates to a landmark report in 1955 called The Powerful Placebo. Viewed as groundbreaking, the analysis of dozens of studies by H.K. Beecher found that 32 percent of patients responded to a placebo.

How does it work? Scientists do not always know, but there are many possible ways. Brain imaging shows that beliefs (“I know these pills will help”) can cause biological changes and affect levels of chemical messengers and stress hormones that signal pain or pleasure.

Emotions, too, can trigger physical changes. Take the case of a child with croup. Crying tightens the airways and makes it tougher to breathe. Many people believe that cool mist is helpful, but when it has been tested in hospital studies with croup tents, it has not been found to help, said Dr. Owen Hendley, a pediatrician at the University of Virginia.

Try it at home, though, and you may get a different result.

If it were not for the placebo effect, “physicians would not be nearly as successful as we are,” said Dr. Thomas Schnitzer, a Northwestern University arthritis specialist. He helped lead a big study that found glucosamine and chondroitin supplements were no better than dummy pills for arthritic knee pain.

Doctors sometimes exploit the placebo effect to help patients. One survey found that many doctors admitted sometimes giving patients sugar pills or drugs or vitamins that would not really help their condition, in an effort to trigger a placebo effect.

In Baltimore, the University of Maryland Medical Center’s shock trauma center is offering some patients Reiki therapy, which claims to heal through invisible energy fields manipulated by a special “master.” The hospital’s anesthesia chief, Dr. Richard Dutton, says it is self-hypnosis and compares it to Lamaze classes that teach pregnant women breathing exercises to take their minds off the pain of labor.

Roy A. Armstrong’s family agreed to it after he was injured in a motorcycle crash last year. The 39-yearold suffered cardiac arrest and had many broken bones. As he lay tethered to a breathing machine, nurse Donna Audia and a partner circled his bed, waving their arms through the air and touching his head while humming and making tunes by rubbing a crystal bowl with a wand.

Armstrong was too sedated to remember anything, but “I think in some way it helped him to get better,” his wife said. He is still recovering through physical therapy.

Dutton said: “You can call it a placebo effect, you can call it a chicken soup effect. It’s all about creating the right mental state in the person. The patients tell us they seem to like it. And in pain management, that’s the whole goal. If 30 percent of your patients get better on placebo, why not give it to them?”

Swear-by-it stories and anecdotal reports of benefit are one thing. Proving a treatment helps is quite another. Many alternative medicine studies have not included a placebo group — people who unknowingly get a dummy treatment so its effect can be compared.

Acupuncture is especially hard to research. Positive studies tend to lack comparison groups that have been given a sham treatment. Or they are often done in China, where the treatment is an established part of health care.

One U.S. study found that true acupuncture relieved knee arthritis pain better than fake acupuncture, in which guide tubes were placed but no needles were inserted. But a European study involving twice as many patients and using a more realistic sham procedure found the fake treatment to be just as good. The conclusion: Pain relief was caused by the placebo effect.

Advertisements and testimonials from product users can encourage a placebo effect. The Federal Trade Commission last summer reached a settlement over advertising claims for Airborne, a product “invented by a teacher” that was supposed to ward off germs spread through the air.

“Products like Airborne are what we call ‘credence products.’ That’s a fancy word for saying it’s difficult or impossible for consumers to determine if the product has done anything for them,” said commission lawyer Rich Cleland. “Part of that is because of the placebo effect. Part of that is because people don’t want to believe they’ve been ripped off.”

Barbara Domen, a former kindergarten teacher in North Carolina, said she was prone to colds and used Airborne six or seven times a year when she flew on planes.

“It worked for me,” although it could be because since she retired, “I’m away from all the germs,” she said. She skipped it on one flight and caught a terrible cold.

“Maybe it’s psychological, but I think I’ll continue to use it,” she said.

Some placebo effects are due to conditioning, or ascribing benefits to something you did that may in fact have played no role in your improvement. Insomnia is an example, said Michael Perlis, a psychologist and neuroscientist at the University of Pennsylvania.

If you have trouble sleeping one night, your body’s need for sleep makes it very likely you’ll sleep well the next night. If you take a sleeping pill, you think you slept well because of the pill, he said.

Do any herbal remedies work for insomnia? “Not that I know of,” Perlis said. “But all of them have potential to be useful with time. It has nothing to do with them — it has everything to do with conditioning.”