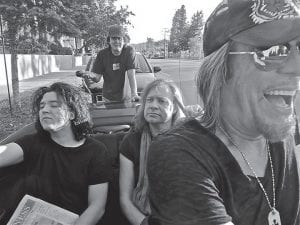 Drummer Matt Abts (right) drives the sound of Planet of the Abts, which features fellow Gov’t Mule member Jorgen Carlsson (far left) on bass and T-Bone Andersson (seated behind Abts) on guitar, keyboards and vocals. Standing behind the three band members are producer Steve Holroyd. Planet of the Abts will peform at Summit City on Saturday.

Matt Abts, drummer for the Grammy-nominated rock band Gov’t Mule, will perform at Summit City in Whitesburg on Saturday night (April 28) with his new side project Planet of the Abts. The show will be the Los Angelesbased band’s last before returning to the road on May 31 to play the eighth annual Mountain Jam in Hunter, N.Y., a three-day festival where Abts will also perform with Gov’t Mule.

Abts began his career in Panama. He moved to the United States and performed with numerous musicians including Dickey Betts and Chuck Leavell, The Allman Brothers Band and Blue Floyd. In 1994 he joined Warren Haynes and Allen Woody (of The Allman Brothers) to form Gov’t Mule. To date, Abts has worked with many of the highest caliber of musicians, including 26 of the world’s most respected bassists, each featured on Gov’t Mule’s albums The Deep End (Volume 1 and 2). Abts’ skills have earned him a reputation as one of the most talented drummers in the world, and he has received numerous drummer awards including a 2003 Grammy nomination for Gov’t Mule’s Sco- Mule and two #1 Drummer Awards from “Drum!” magazine.

Swedish musician Carlsson relocated to Los Angeles in the early 90’s and was soon established as a highly sought-after session musician and performer. His innovative and unique style enabled him to fill the role of bassist that Woody had played in Gov’t Mule before his passing. In 2008, Carlsson became an official member of Gov’t Mule. Carlsson’s spontaneous collaborations in the studio inspired Gov’t Mule’s first studio album in over three years.

Guitarist/keyboardist/vocalist Andersson was born and raised in Sweden. After touring extensively in Europe, Andersson moved to the U.S. and has performed with various artists, and as a guest performer with Gov’t Mule. Andersson also performed the guitar work on the computer/video game “Quake III Arena”, which has sold over 10 million units.

In June 2011, POA performed their much anticipated debut show in Los Angeles and released an advance copy, limited edition CD. Recorded by acclaimed British engineer Steve Holroyd, the album features music ranging from soundscapes that bring to mind Pink Floyd to full-throttle rock and roll that combines the raw power of The Stooges with the musicianship Electric Ladyland-era Jimi Hendrix. The band’s live shows have proven they sound just as powerful and multi-layered in the flesh as they do on record.

Admission to the 8 p.m. show is $18. Also performing are Anderson Road and The Truly Blessed. Persons wishing more information may call 633-2715.